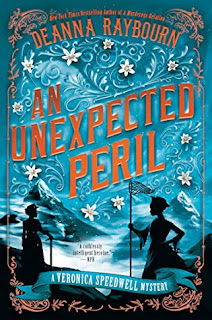 A princess is missing, and a peace treaty is on the verge of collapse in this new Veronica Speedwell adventure from the New York Times bestselling and Edgar Award-nominated author Deanna Raybourn.

January 1889. As the newest member of the Curiosity Club—an elite society of brilliant, intrepid women—Veronica Speedwell is excited to put her many skills to good use. As she assembles a memorial exhibition for pioneering mountain climber Alice Baker-Greene, Veronica discovers evidence that the recent death was not a tragic climbing accident but murder. Veronica and her natural historian beau, Stoker, tell the patron of the exhibit, Princess Gisela of Alpenwald, of their findings. With Europe on the verge of war, Gisela's chancellor, Count von Rechstein, does not want to make waves—and before Veronica and Stoker can figure out their next move, the princess disappears.

Having noted Veronica's resemblance to the princess, von Rechstein begs her to pose as Gisela for the sake of the peace treaty that brought the princess to England. Veronica reluctantly agrees to the scheme. She and Stoker must work together to keep the treaty intact while navigating unwelcome advances, assassination attempts, and Veronica's own family—the royalty who has never claimed her.

Kindle Edition, 336 pages
Expected publication: March 2nd 2021
by Berkley
4/5 stars
What better day to post a review of one of my favourite couples, Veronica and Stoker, than Valentine's Day.
An Unexpected Peril is book 6 in Deanna Raybourn's Veronica Speedwell Series and one I've been waiting for.  On any given day it's great to spend time with this couple but even more so now given what the world is going through.  If you've read this series you'll know what I mean and if not...well you should pick up A Curious Beginning.
Again in typical Raybourn style, she delivers a unique story that sets Veronica and Stoker on a path filled with mystery, suspicion and, danger with a group of unreliable characters. There were new faces and new places along with some familiar faces. The mystery part had some twists and turns, quite entertaining with the usual bantering and comments that made me smile and put me in my happy place.
This Veronica Speedwell Series is one of my favorite series, I love that each story is different, the time period is great and I love watching their relationship develop.  Definietely a series I highly recommend and suggest starting at the beginning with A Curious Beginning.
My thanks to Berkley for an advanced ARC (via Netgalley) in exchange for an honest review.
Posted by Margaret @ JustOneMoreChapter at 2:17 PM