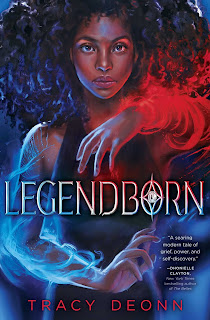 After her mother dies in an accident, sixteen-year-old Bree Matthews wants nothing to do with her family memories or childhood home. A residential program for bright high schoolers at UNC–Chapel Hill seems like the perfect escape—until Bree witnesses a magical attack her very first night on campus.

A secret society of so called “Legendborn” students that hunt the creatures down.

And a mysterious teenage mage who calls himself a “Merlin” and who attempts—and fails—to wipe Bree’s memory of everything she saw.

The mage’s failure unlocks Bree’s own unique magic and a buried memory with a hidden connection: the night her mother died, another Merlin was at the hospital. Now that Bree knows there’s more to her mother’s death than what’s on the police report, she’ll do whatever it takes to find out the truth, even if that means infiltrating the Legendborn as one of their initiates.

She recruits Nick, a self-exiled Legendborn with his own grudge against the group, and their reluctant partnership pulls them deeper into the society’s secrets—and closer to each other. But when the Legendborn reveal themselves as the descendants of King Arthur’s knights and explain that a magical war is coming, Bree has to decide how far she’ll go for the truth and whether she should use her magic to take the society down—or join the fight.

Hardcover, 512 pages
Published September 15th 2020
by Margaret K. McElderry Books
4/5 stars
I've heard of authors that dislike comments along the lines of 'such and such genre isn't my thing but I read it anyway and that's why I don't like this book'. Can't say I blame them, why read a book that you know you won't like? Right?  In my case I'll confess that fantasy isn't really my thing but I would never penalise a book because I wanted to try the genre out.  Sometimes its good to step out of ones comfort zone and see if there is something you might be missing.  Such is the case with Legendborn which was part of an Owlcrate YA box, I was thrilled to open this book and see the roll Arthur/Merlin and that whole legend play.
Legendborn is more than just a story about the Arthur legend, it's about a young girl and the grief and despair she goes though with the loss of her mother.
This hardcover comes in at almost 500 pages, it was fast paced (though its a bit hard on the wrists to hold after a while).  With the opening scenes I was hooked and just wanted to give Bree a hug, so ya I was drawn in right away and never looked back.
There are so many things besides grief that shine through - I loved the diversity, what Black women endure, history/slavery and the Arthurian legend.
The world building was kinda staggering, with attention to detail everything made sense and clicked into place.  The characters weren't perfect, a nice mix of those I like and others not so much.  The action scenes vivid, there were twists and turns.  As for the ending, I was caught off guard and loved it - a great opening for book 2.  Yea it's the start of a new series.
So slowly I am reading more YA fantasy books maybe, just maybe I might graduate to adult fantasy but lets not push that just yet.
This book was part of my 2021 Reading Off My Shelf Challenged and obtained from the fine folks at Owlcrate which included a special cover and signed by the author.
Posted by Margaret @ JustOneMoreChapter at 4:05 PM

Email ThisBlogThis!Share to TwitterShare to FacebookShare to Pinterest
Labels: 2021, 2021 Reading Off My Shelf, New to me author, OwlCrate, Tracy Deonn, YA Fantasy