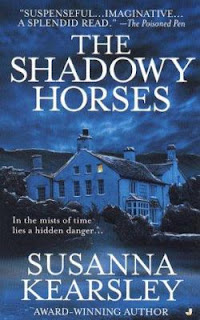 THE INVINCIBLE NINTH ROMAN LEGION MARCHES FROM YORK TO FIGHT THE NORTHERN TRIBES. AND THEN VANISHES FROM THE PAGES OF HISTORY.

Archaeologist Verity Grey has been drawn to the dark legends of the Scottish Borderlands in search of the truth buried in a rocky field by the sea.

Her eccentric boss has spent his whole life searching for the resting place of the lost Ninth Roman Legion and is convinced he's finally found it—not because of any scientific evidence, but because a local boy has "seen" a Roman soldier walking in the fields, a ghostly sentinel who guards the bodies of his long-dead comrades.

Here on the windswept shores, Verity may find the answer to one of the great unsolved mysteries of our time. Or she may uncover secrets someone buried for a reason.


Since reading The Rose Garden, Susanna Kearsley has become a favorite author of mine. I had the privilege of taking a seminar with her once about how to research HF. She talked about how she goes to the places she is writing about and gets a feel for the area. What a wonderful experience that would be. She definitely got a feel for this book.

She did a great job bringing out the details of the land. Added some supernatural elements to draw the reader in, with some mystery and romance to boot.

The Distant Hours by Kate Morton

A long lost letter arrives in the post and Edie Burchill finds herself on a journey to Milderhurst Castle, a great but moldering old house, where the Blythe spinsters live and where her mother was billeted 50 years before as a 13 year old child during WWII. The elder Blythe sisters are twins and have spent most of their lives looking after the third and youngest sister, Juniper, who hasn’t been the same since her fiance jilted her in 1941.

Inside the decaying castle, Edie begins to unravel her mother’s past. But there are other secrets hidden in the stones of Milderhurst, and Edie is about to learn more than she expected. The truth of what happened in ‘the distant hours’ of the past has been waiting a long time for someone to find it.

Morton once again enthralls readers with an atmospheric story featuring unforgettable characters beset by love and circumstance and haunted by memory, that reminds us of the rich power of storytelling.

I will start by saying that I am a BIG Kate Morton fan.  It all started with The Forgotten Garden, then The House at Riverton and finally The Secret Keeper just blew me away (I LOVED that book).  The only thing missing was The Distant Hours, then Audible had it on special, which I took as a sign that it was time to read this one.

Did I like it?  Ya I did, but I have to say that I didn't love it.  The opening chapter, that usually grabs my attention just wasn't that exciting, so her mother cries when she receives an old letter, whippee!.  Not like watching your mother stab someone to death, or a little girl abandoned on a ship from England to Australia.

The first half I felt dragged somewhat, my mind was wandering at times and I would have to rewind (which I never usually have to do with a good audio).   There was so much detail that really didn't need to be there. The last third did pick up the pace a little, it got interesting again and the ending was an okay ending, it was one that I didn't anticipate.

I do have to admit that I finished the book feeling very sad for the Blythe sisters.  I suppose that I could say more but I hate spoilers and don't like to leave any.

I gave this book three stars, maybe if I had read the book instead of the audio version, but it was such a huge book that I am not sure I would have made it half way through.

I am still a huge Kate Morton fan and will read whatever she writes.

Between Two Fires by Christopher Buehlman

His extraordinary debut, Those Across the River, was hailed as “genre-bending Southern horror” (California Literary Review), “graceful [and] horrific” (Patricia Briggs). Now Christopher Buehlman invites readers into an even darker age—one of temptation and corruption, of war in heaven, and of hell on earth…

And Lucifer said: “Let us rise against Him now in all our numbers, and pull the walls of heaven down…”

The year is 1348. Thomas, a disgraced knight, has found a young girl alone in a dead Norman village. An orphan of the Black Death, and an almost unnerving picture of innocence, she tells Thomas that plague is only part of a larger cataclysm—that the fallen angels under Lucifer are rising in a second war on heaven, and that the world of men has fallen behind the lines of conflict.

Is it delirium or is it faith? She believes she has seen the angels of God. She believes the righteous dead speak to her in dreams. And now she has convinced the faithless Thomas to shepherd her across a depraved landscape to Avignon. There, she tells Thomas, she will fulfill her mission: to confront the evil that has devastated the earth, and to restore to this betrayed, murderous knight the nobility and hope of salvation he long abandoned.

As hell unleashes its wrath, and as the true nature of the girl is revealed, Thomas will find himself on a macabre battleground of angels and demons, saints, and the risen dead, and in the midst of a desperate struggle for nothing less than the soul of man.


I told myself this year that I would stay on top of my reviews.  Once read, post my review.  This book I finished a week ago and for that I am grateful.   As soon as I read the blurb about Between Two Fires I thought I would love it, I mean read the blurb over.  It's got some of  my favorite things, historical fiction, some supernatural stuff, a quest, mystery, danger, how much more could there be in one book?  It is rated on Goodreads with a 4.20 rating and it is just as good on Amazon.

So what are my thoughts?   Basically I would like to know what I missed, because obviously I am missing something major here.  I didn't like the book, there I said it.  It started out good, I was intrigued and then it went downhill.  It just didn't flow, I couldn't connect to the characters, which I wanted to so badly. Things happened for no rhyme or reason, I actually thought it had a Terry Pratchett feel to it.  I also had the audio for it and listened to the last half thinking it might improve, nope it didn't.

Now that is my opinion, yours might be different.
Posted by Margaret @ JustOneMoreChapter at 10:54 PM No comments:

A Thousand Splendid Suns is a breathtaking story set against the volatile events of Afghanistan's last thirty years, from the Soviet invasion to the reign of the Taliban to post-Taliban rebuilding, that puts the violence, fear, hope and faith of this country in intimate, human terms. It is a tale of two generations of characters brought jarringly together by the tragic sweep of war, where personal lives, the struggle to survive, raise a family, find happiness, are inextricable from the history playing out around them.
Propelled by the same storytelling instinct that made The Kite Runner a beloved classic, A Thousand Splendid Suns is at once a remarkable chronicle of three decades of Afghan history and a deeply moving account of family and friendship. It is a striking, heartwrenching novel of an unforgiving time, an unlikely friendship, and an indestructible love, a stunning accomplishment.

Here is a very emotional book, from the author of The Kite Runner, Khaled Hosseini.  It has been in my TBR pile years, basically since I read The Kite Runner (and the only reason I read that one was because my son nagged and nagged me till I did).  This book basically has the same story.  I am part of a TBR group on Goodreads.  Every month we exchange names, for January this was my book.
My thoughts are hard to put into words.  I enjoyed, is that even the right word to use?  From the POV of two women, it is hard to believe this is written by a man.  The story is an eye opener to how women are treated, their hopes and dreams are like dust in the wind.  The emotions felt while reading this was powerful. The author was able to put me right in the neighbour and feel the story.  Yes it can be taken as a depressing and brutul story, but also of hope and the toughness of the human spirit.

The description says it all 'a tale of two generations of characters brought jarringly together by the tragic sweep of war, where personal lives, the struggle to survive, raise a family, find happiness, are inextricable from the history playing out around them''heartwrenching'
'struggle to survive'

“One could not count the moons that shimmer on her roofs,
Or the thousand splendid suns that hide behind her walls.”

“...of all the hardships a person had to face none was more punishing than the simple act of waiting.”

Shadow of Night by Deborah Harkness

Deborah Harkness exploded onto the literary scene with her debut novel, A Discovery of Witches, Book One of the magical All Souls Trilogy and an international publishing phenomenon. The novel introduced Diana Bishop, Oxford scholar and reluctant witch, and the handsome geneticist and vampire Matthew Clairmont; together they found themselves at the center of a supernatural battle over an enchanted manuscript known as Ashmole 782.

Now, picking up from A Discovery of Witches’ cliffhanger ending, Shadow of Night plunges Diana and Matthew into Elizabethan London, a world of spies, subterfuge, and a coterie of Matthew’s old friends, the mysterious School of Night that includes Christopher Marlowe and Walter Raleigh. Here, Diana must locate a witch to tutor her in magic, Matthew is forced to confront a past he thought he had put to rest, and the mystery of Ashmole 782 deepens.

Deborah Harkness has crafted a gripping journey through a world of alchemy, time travel, and magical discoveries, delivering one of the most hotly anticipated novels of the season.

I have to say that I enjoyed A Discovery of Witches a little more.  I found this book a little confusing at times with all the different names.  I am sitting here with questions that weren't answered, but that is what book three will hopefully answer.

But that being said I have really enjoyed this series.  The author has a smooth way of writing, with many layers, but you really do need to pay attention, if you miss something it could really mess up the story.  The trip to the past is not just a search for Ashmole 782 but also a love story and struggles with Matthew and Diana's early relationship.

Can't wait for the next book.
Posted by Margaret @ JustOneMoreChapter at 8:09 PM 3 comments:

In My Mailbox - January 7th

A wonderful weekly meme hosted by The Story Siren, the place to go if you love YA!!

If I continue at the rate I am going with books right now, I don't think I will ever be able to read them all in this lifetime.

From NetGalley for review

From Edelweiss for review

Purchases, I think I am in a witchy mood these days, lol

Next week I will do the ebooks...
Posted by Margaret @ JustOneMoreChapter at 7:38 PM 3 comments: