Review: Canoeing with the Cree by Eric Sevareid 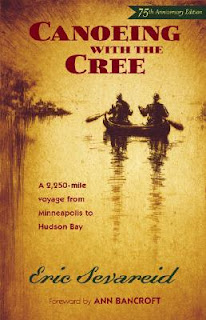 In 1930 two novice paddlers--Eric Sevareid and Walter C. Port--launched a secondhand 18-foot canvas canoe into the Minnesota River at Fort Snelling for an ambitious summer-long journey from Minneapolis to Hudson Bay.
Without benefit of radio, motor, or good maps, the teenagers made their way over 2,250 miles of rivers, lakes, and difficult portages. Nearly four months later, after shooting hundreds of sets of rapids and surviving exceedingly bad conditions and even worse advice, the ragged, hungry adventurers arrived in York Factory on Hudson Bay--with winter freeze-up on their heels.
First published in 1935, Canoeing with the Cree is Sevareid's classic account of this youthful odyssey. The newspaper stories that Sevareid wrote on this trip launched his distinguished journalism career, which included more than a decade as a television correspondent and commentator on the CBS Evening News. Now with a new foreword by Arctic explorer, Ann Bancroft.

Paperback, 248 pages
Published April 15th 2005
by Borealis Books
(first published May 1st 1935)
4/5 stars
I've been on an outdoorish kick lately, maybe I am craving getting outside and basking in some sun while on the water.  I read this after finished Alone Against the North about a local adventurer trekking northern Ontario.  With Canoeing with the Cree it jumps back to 1930 when 2 teens embark on a 2250 mile adventure.
This was a nice story filled with pictures, maps and people met along the way.  I loved getting the visuals which just made this journey much more.  At first I thought it would be a solitude journey with just Eric and Walter but they were able to stop along the way, stock up on supplies and meet people. They had little experince, a deadline between them and Hudson Bay but determination and commitment kept them on the path.

A nice little book first published in 1935 that still has a lot of appeal.
This book is part of my 2021 Reading Off My Shelf Challenge.
Posted by Margaret @ JustOneMoreChapter at 2:54 PM

Email ThisBlogThis!Share to TwitterShare to FacebookShare to Pinterest
Labels: 2021, 2021 Reading Off My Shelf, Eric Sevareid, New to me author, Nonfiction