Excerpt: The Vineyard at Painted Moon by Susan Mallery

I am thrilled to share this excerpt from The Vineyard at Painted Moon today. 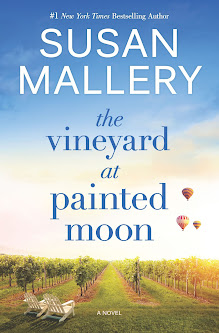 “Not that what you’re wearing isn’t great, but the party starts in an hour.”

Mackenzie Dienes looked up from the grapevine she’d been studying, her mind still on the tight clusters of small, hard grapes that would, come late September, be ripe and sweet and ready for harvest. Between now and then, she would monitor their progress, willing them to greatness and protecting them from danger, be it mold, weather or hungry deer.

She blinked at the man standing in front of her, tall and familiar, with an easy smile and broad, capable shoulders.

“Party?” she asked, letting her thoughts of the vineyards go and remembering that, yes, indeed, it was the evening of the annual Solstice Party, hosted by the Barcellona family. As she was a Barcellona, by marriage if not by name, she would be expected to attend.

Wanted to attend, she reminded herself. It was always a good time, and Stephanie, her sister-in-law, worked hard to make it a perfect night.

“The party,” she repeated, her voice slightly more panicked this time, then glanced down at herself. “Crap. What time is it?”

Rhys, her husband, shook his head. “You really don’t listen when I talk, do you? We have an hour. You’ll be fine.”

She pulled off her gloves and shoved them into the left front pocket of her coveralls, then stepped behind Rhys and gave him a little push toward the flatbed truck he’d driven out to the west vineyards.

“You say that because all you have to do is shower and get dressed. I have to do the girl thing.”

“Which takes you maybe ten minutes.” He put his arm around her as they hurried toward the truck. “Happy with the grapes?”

“I think so,” she said, glancing toward the healthy vines growing on either side of them. “We might have to do some thinning in a couple of weeks, but so far, so good.”

As they slid onto the bench seat of the old truck, he glanced at her. She smiled, knowing there was a fifty-fifty chance he would call her out on her thinning statement. He was, after all, the vineyard manager. Technically all the decisions about the vineyard were made by him with her input, but not her instruction. As winemaker, she managed the grapes from the moment they were picked until the wine was bottled.

But at Bel Après, areas of responsibility often overlapped. Theirs was a large, boisterous family in which everyone had opinions. Not that Mackenzie listened to a lot of other ideas when it came to her wines, although as Rhys often pointed out, she was very free offering hers when it came to his work.

He drove along the dirt path that circled the vineyard, stopping by her truck. She slid into the cab, then followed him back to the family compound. The main road leading into Walla Walla was thick with tourists who wanted to enjoy the longest day of the year. She merged into the slow-moving traffic, doing her best to keep from glancing at the clock on the truck’s dashboard as she inched along.

Vineyards stretched out on either side of the road, flat on the left and rising toward the hills on the right. Bright green leaves topped sturdy trunks that had been carefully trained to grow exactly as she wanted them to. The rows were long and neat, and the spaces between them were filled with native grasses that held in moisture and protected the roots from the heat.

Looking at her healthy crop kept her mind off the fact that she and Rhys were going to be desperately late.

Twenty minutes later, she followed him off the highway onto a less crowded secondary road—a back way home. Five minutes after that, they parked the trucks by the processing buildings behind the big tasting room. Rhys had already claimed one of the golf carts the family used to get around. She slid in next to him and they took off toward the center of the property.

Bel Après Winery and the surrounding land had been in the Barcellona family for nearly sixty years. Rhys and his siblings were third-generation. The original main house had been updated several times. When Rhys and Mackenzie had married, Barbara, Rhys’s mother, had suggested they build themselves a house close to hers, rather than commute from town. Eager to stay in the good graces of her new mother-in-law, Mackenzie had agreed.

A large two-story home had been built. Barbara and Mackenzie had decorated every room, the act of choosing everything from light fixtures to doorknobs cementing their affection for each other.

A few years later, Stephanie, the second of Barbara’s four children, had gotten a divorce and moved back home with her two kids, requiring another house to be constructed. When the youngest of the three girls had married, the last house had been added. Only Lori, the middle daughter, still lived in the original home.

All four houses faced a huge central courtyard. Mexican pavers were shaded by vine-covered pergolas. The extended family used the space for big dinners and as a kids’ play area. If one of the women baked cookies, a cookie flag was hung out the front door, inviting anyone to stop by. At Christmas, a large tree was brought in from Wishing Tree, and for the annual Summer Solstice Party, dozens of long tables were brought in to seat the two hundred or so guests.

Rhys swung the golf cart behind the large main house, circling counterclockwise. Normally he would cut across the courtyard, but with all the party preparations, he had to go the long way. He pulled up at the rear entrance to their house and they dashed inside.

Mackenzie paused to unlace her boots and left them in the mudroom. Rhys did the same. They raced up the stairs together, separating at the landing to head to their individual en suite bedrooms.

Once in her bathroom, she started the shower. Thankfully, she’d already picked out the dress she would wear. She raced through a shower. After she dried off, she wrapped her hair in a towel and dug out the scented body lotion Rhys had given her a couple of years ago. Why anyone would want to smell like coconut and vanilla was beyond her, but he liked it.

She walked into the large closet and opened her underwear drawer. To the right were all the sensible bikini panties she usually wore—to the left were the fancier ones for special occasions. She chose a black pair and slipped them on, then went to the second drawer and looked for the matching push-up bra. When it and the pads were in place and doing the best they could with her modest curves, she pulled on a robe and returned to the bathroom.

After plugging in her hot rollers, it took her only a few minutes to apply eyeliner and mascara. She was flushed from the day working outside, so she didn’t bother with any other makeup.

Her hair took a lot longer. First she had to dry the dark red shoulder-length waves, then she had to curl them. While the rollers were in place, she searched for a pair of black high-heel sandals that wouldn’t leave her crippled by the end of the night.

Those found, she opened her small jewelry box and pulled out her wedding set, sliding both the engagement ring and the wedding band into place on her left hand. Diamond stud earrings followed. She’d barely stepped into her sleeveless black dress when Rhys walked into the closet, fully dressed in black slacks and a dark gray shirt.

She sighed when she saw him. “See. You have it so much easier than me.”

“Yes, but in the end, you’re more beautiful. That should be worth something.”

“I’d rather have the extra time.”

She turned, presenting him with her back. He pulled up the zipper, then bent to collect her shoes. They retreated to her bathroom and together began removing the curlers.

“We’re late,” Mackenzie said, catching sight of his watch. “Your mom is going to be all snippy.”

“She’ll be too busy welcoming her guests.” The last of the curlers was flung onto the counter. Mackenzie fluffed her hair, then pointed to the bedroom.

“Retreat,” she said, reaching for the can of hair spray.

Rhys ducked to safety. She sprayed the curls into submission before running into the bedroom to escape the death cloud. Rhys was on the bench at the foot of the large bed. She sat next to him and quickly put on her shoes.

“Done,” she said, pausing to reacquaint herself with the seldom-used skill of walking in heels.

She grabbed her husband’s wrist. “Seven fifteen. Barbara’s going to kill us.”

“She’s not. I’m her only son and you’re just plain her favorite.”

“We weren’t ready exactly at seven. I can already hear the death-march music in my head. I want to be buried on Red Mountain.”

Rhys chuckled as he led the way downstairs. “In the vineyard? I’m not sure your decaying body is going to be considered organic.”

“Are you saying I’m toxic?” she asked with a laugh as they walked toward the front door.

“I’m saying you’re wonderful and I’d like us to have a good night.”

There was something in his tone, she thought, meeting his gaze. She’d known this man her entire adult life. They’d met over Christmas her freshman year of college. Her roommate, his sister Stephanie, had dragged Mackenzie home to meet the family. Grateful not to have to spend the holiday by herself, Mackenzie had gone willingly and had quickly found herself falling not only for her best friend’s hunky older brother but for the entire Barcellona family and the vineyards they owned. Barbara had been like a surrogate mother, and the vineyards, well, they had been just as magical as Rhys’s sexy kisses.

Now she studied her husband’s expression, seeing the hint of sadness lurking behind his easy smile. She saw it because she hid the same emotion deep inside herself. The days of stealing away for sexy kisses were long gone. There were no lingering looks, no intimacy. They had a routine and a life, but she was less sure about them still having a marriage.

“I’d like that, too,” she murmured, knowing he wasn’t asking them not to fight. They never did. Harsh words required a level of involvement they simply didn’t have anymore.

“Then let’s make that happen,” he said lightly, taking her hand in his and opening the front door.