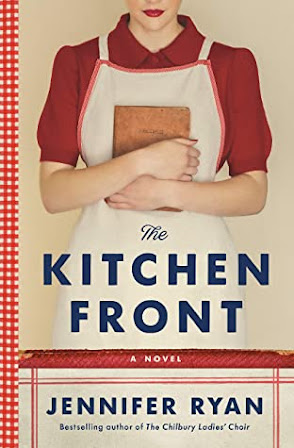 In a new World War II-set story from the bestselling author of The Chilbury Ladies' Choir, four women compete for a spot hosting a wartime cookery program called The Kitchen Front - based on the actual BBC program of the same name - as well as a chance to better their lives.

Two years into WW2, Britain is feeling her losses; the Nazis have won battles, the Blitz has destroyed cities, and U-boats have cut off the supply of food. In an effort to help housewives with food rationing, a BBC radio program called The Kitchen Front is putting on a cooking contest--and the grand prize is a job as the program's first-ever female co-host. For four very different women, winning the contest presents a crucial chance to change their lives.

These four women are giving the competition their all--even if that sometimes means bending the rules. But with so much at stake, will the contest that aims to bring the community together serve only to break it apart?
Kindle Edition, 416 pages
Expected publication: February 23rd 2021
by Ballantine Books
4/5 stars
Happy Release Day to Jennifer Ryan! The Kitchen Front as been released into the world.
At first I wasn't sure that I was ready for another WW2 book, they can be emotionally draining at times.  When I first started this book my initial thought was that it would be a lighter story about 4 women squabbling in the kitchen.  But low and behold as the story progressed it showed a side of the war not often seen.  These 4 women had different roles but longed for something else.
Playing off a BBC radio program, I loved how some of the chapters ended with some recipes from the actual time period and using ingredients available at that time.  The struggles these women faced was vividly portrayed and authentic.  It's an emotional time as they confront inner demons while at the same time come together for this cooking completion where they get more than they bargained for.
The Kitchen Front is a story of personal growth, reaching out, forgiveness and relationships. It's finding the strength to step out of their comfort zone and taking risks.  I'm glad that I read this book, it was uplifting watching the changes that take place.  Definitely a book and author I recommend.
My thanks to Ballantine Books (via Netgalley) for an advanced copy in exchange for an honest review.
Posted by Margaret @ JustOneMoreChapter at 11:43 PM