Review: What You Never Knew by Jessica Hamilton 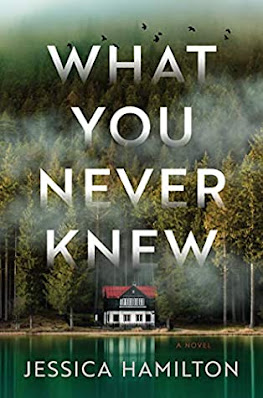 Told in alternating points of view between the living and the dead, Jessica Hamilton's debut novel will be perfect for fans of THE LOVELY BONES.

Idyllic Avril lsland, owned by the Bennett family, where their hundred-year-old cottage sat nestled in acres of forest. Forty-year-old June Bennett believed that the island had been sold after the summer of her father's disappearance when she was only twelve years old. It's months after the shocking death of her older sister May in a fatal car accident, that June finds out that the cottage was never sold. Avril Island is still owned by the Bennett family and now it's hers.

Still reeling from the grief of losing her sister, June travels back to Avril lsland in search of answers. As she digs, she learns that the townspeople believe her father murdered someone before taking off. And that's when she begins to notice strange things happening on the island--missing family possessions showing up on her bed, doors open when she had locked them closed. It takes June no time at all to realize that her childhood summers at Avril Island were not at all what they had seemed to be.

Kindle Edition, 304 pages
Expected publication: April 13th 2021
by Crooked Lane Books
3.5/5 stars
What You Never Knew is a book about secrets and we all know that eventually they have a way of not being so secret anymore.
I loved the setting, an old house on an island all by itself just begs to being up to no good.  Honestly it sounds enticing but I couldn't imagine myself being there all alone.  It's an island where weird things happen, usually in the middle of the night.  The perfect setting for a story with ghosts of the past.
Though it's told in alternating POVs the majority is via June as she returns to the family vacation home she hasn't been to in 30 years, leaving abruptly when only 12 years old.  What follows is a search that will have her questioning everything she thought she knew of her family.
The other POV is her sister, May, who died and this is were What You Never Knew comes in.  An interesting perspective that helped the story along.
What You Never Knew was an interesting and unique story but not without a few things I struggled with.  I loved getting to know the girls during their summers when younger, I felt the relationship and sisterly bond but the current time period had me not really knowing them anymore, I missed that. The ending resolved things but also left me pondering still.
This is the authors debut which releases April 13th and available for pre order now.
My thanks to Crooked Lane Books for a digital ARC in exchange for an honest review.
Posted by Margaret @ JustOneMoreChapter at 1:06 PM