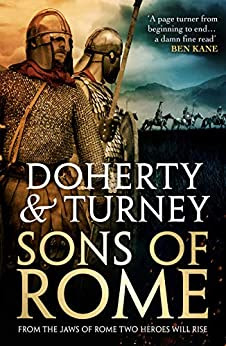 As twilight descends on the 3rd century AD, the Roman Empire is but a shadow of its former self. Decades of usurping emperors, splinter kingdoms, and savage wars have left the people beleaguered, the armies weary and the future uncertain. And into this chaos Emperor Diocletian steps, reforming the succession to allow for not one emperor to rule the world, but four.

Meanwhile, two boys share a chance meeting in the great city of Treverorum as Diocletian's dream is announced to the imperial court. Throughout the years that follow, they share heartbreak and glory as that dream sours and the empire endures an era of tyranny and dread. Their lives are inextricably linked, their destinies ever-converging as they rise through Rome's savage stations, to the zenith of empire. For Constantine and Maxentius, the purple robes beckon.

Hardcover, 528 pages
Expected publication: March 1st 2021
by Head of Zeus
4.5/5 stars
It's been a while since I've spent time in the Roman Empire era, this book has reminded me how much I have enjoyed it and have been missing out.  It's the 3rd century AD when a chance meeting connects 2 boys who will grow to become good friends in an era of chaos, violence and heartache.
Sons of Rome is told alternately between these two friends, Constantine and Maxentius, spanning many years.  It's also penned by two authors which takes a special hand to keep the narrative smooth without the reader detecting the change of hands.  It's evident that Turney and Doherty have researched extensively and brought this story to life with its vivid descriptions of not just the locale and the players but the political climate and its history.  There is a large cast of characters but not overwhelmingly so, it enhances the story making it authentic.  Other then hearing the name Constantine I knew nothing of his claim to fame. As for Maxentius, that was a new one for me, which just made this read all the more enjoyable.
With four emperors ruling, the battle for power along with the brutality (sometimes a little on the heavy side) Sons of Rome is a well written story by two new to me authors.  It's a story of relationships, those between friends and parent and even rivals.  This is the first in a new series with Masters of Rome being book #2, which I am looking forward to reading.
My thanks to Head of Zeus for print copy of this book in exchange for an honest review. 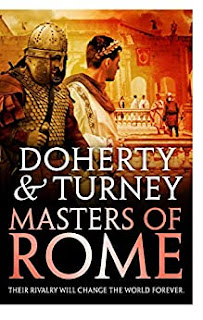 Posted by Margaret @ JustOneMoreChapter at 10:41 PM