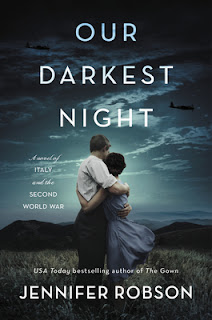 To survive the Holocaust, a young Jewish woman must pose as a Christian farmer’s wife in this unforgettable novel from USA Today bestselling author Jennifer Robson—a story of terror, hope, love, and sacrifice, inspired by true events, that vividly evokes the most perilous days of World War II.

It is the autumn of 1943, and life is becoming increasingly perilous for Italian Jews like the Mazin family. With Nazi Germany now occupying most of her beloved homeland, and the threat of imprisonment and deportation growing ever more certain, Antonina Mazin has but one hope to survive—to leave Venice and her beloved parents and hide in the countryside with a man she has only just met.

Nico Gerardi was studying for the priesthood until circumstances forced him to leave the seminary to run his family’s farm. A moral and just man, he could not stand by when the fascists and Nazis began taking innocent lives. Rather than risk a perilous escape across the mountains, Nina will pose as his new bride. And to keep her safe and protect secrets of his own, Nico and Nina must convince prying eyes they are happily married and in love.

But farm life is not easy for a cultured city girl who dreams of becoming a doctor like her father, and Nico’s provincial neighbors are wary of this soft and educated woman they do not know. Even worse, their distrust is shared by a local Nazi official with a vendetta against Nico. The more he learns of Nina, the more his suspicions grow—and with them his determination to exact revenge.

As Nina and Nico come to know each other, their feelings deepen, transforming their relationship into much more than a charade. Yet both fear that every passing day brings them closer to being torn apart . . ..
Paperback, 384 pages
Published January 5th 2021
by William Morrow Paperbacks
4.5/5 stars
Jennifer Robson is one author that I have managed to read everything as released.  She was also the first author event I attended back when her debut, Somewhere in France, was released in 2013.  While I have enjoyed all her books I find they get better with each new one.
One of the things this pandemic has done is made virtual author events easily accessible with zoom and video chats on both Facebook and Instagram.  Jennifer Robson has shared the initial inspiration for this book and I encourage readers to check out her website at https://jennifer-robson.com/ where you can follow the links to see pics and videos that add so much to this story.
Our Darkest Night is a well researched WW2 story taking place in Italy.  Getting a different perspective reinforced the brutality the Nazis wheeled. Even with the distance from Germany Jewish people suffered, were abused and boarded trains to destinations unknown.  The first part of the book showed the strong family bond and what life was like in this village.  As it progressed the darkness of the war was shown and at times hard to read.  I definitely felt a wide range of emotions reading this book.
Again Robson has written a story of hope, strength, family and endurance.  A book that I will recommend.
This book was part of my 2021 Reading Off My Shelf Challenge.