Review: The Steel Beneath the Silk (The Emma of Normandy Trilogy #3) by Patricia Bracewell 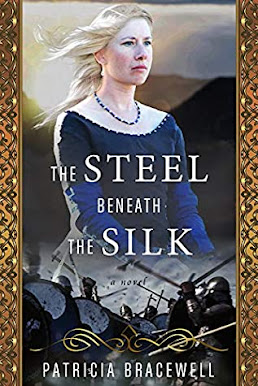 A breathtaking conclusion to Bracewell’s Emma of Normandy Trilogy, brimming with treachery, heartache, tenderness and passion as the English queen confronts ambitious and traitorous councilors, invading armies and the Danish king’s power-hungry concubine.

In the year 1012 England’s Norman-born Queen Emma has been ten years wed to an aging, ruthless, haunted King Æthelred. The marriage is a bitterly unhappy one, between a queen who seeks to create her own sphere of influence within the court and a suspicious king who eyes her efforts with hostility and resentment. But royal discord shifts to grudging alliance when Cnut of Denmark, with the secret collusion of his English concubine Elgiva, invades England at the head of a massive viking army. Amid the chaos of war, Emma must outwit a fierce enemy whose goal is conquest and outmaneuver the cunning Elgiva, who threatens all those whom Emma loves.
Kindle Edition,
Expected publication: March 2nd 2021
by Bellastoria Press
5/5 stars
I had been wondering for a number of years when the final instalment in the Emma of Normandy Trilogy was going to be released.  Excitement mounted in the fall when I heard that March 2nd would be release day.
The previous books in this series, Shadow on the Crown and The Price of Blood were both 5 star reads and this conclusion to the series followed suit.
It is the year 1012 when The Steel Beneath the Silk begins and I'll confess to being a little nervous that I didn't do a reread for fear of forgetting what happened previously.  But those fears were unfounded as people and circumstances were brought back with lots of 'oh right, I remember that' or 'yea I remember her now' - Elgiva comes to mind there.
Emma is one of those women I knew nothing about until I read this series and now I am on the lookout to learn more about her and the time period.  She was a formidable woman, a pawn for her family who lived life with courage, heartache and by the time this book takes places she has rooted herself in England. She was a woman ahead of her time, a queen with confidence and integrity.
This book was vivid in not just character development but with a story that was vivid.  I love what she wrote in the author notes -
Because I write fiction and not history, I do not claim that things happened exactly in the way, only that they could have.
Which is what I love in historical fiction.  This book was well researched and the author put me right there.  The closer I got to the end the faster I read, loving the ending though not at all what I expected - remember I didn't know my history on Emma.
This series is one I highly recommend. If you are a fan of Eleanor of Aquitaine you should give this series a go.
My thanks to the author and Netgalley for this digital arc in exchange for an honest review.

Posted by Margaret @ JustOneMoreChapter at 2:19 PM