The Beekeeper's Daughter by Santa Montefiore 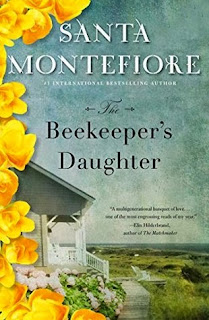 From the #1 internationally bestselling author, her first book set in America, the story of a mother and daughter searching for love and happiness, unaware of the secrets that bind them. To find what they are longing for they must confront the past, and unravel the lies told long ago.

England, 1932: Grace Hamblin is growing up on the beautiful estate of the Marquess and Marchioness of Penselwood. The beekeeper’s daughter, she knows her place and what the future holds—that is until her father dies. Her childhood friend Freddie has recently become her lover, and she is thankful when they are able to marry and take over her father’s duties. But there is another man who she just can’t shake from her thoughts…

Massachusetts, 1973: Grace’s daughter Trixie Valentine is in love with an unsuitable young man. Jasper Duncliffe is wild and romantic, and in a band that might hit it big. But when his brother dies and he is called home to England, Jasper promises to come back for Trixie one day, if only she will wait for him. Grace thinks that Trixie is surely abandoned and tries to support her daughter, but Trixie brushes off her mother’s advice and comfort. She is confident that Jasper’s love for her was real…

Set on a fictional island off the coast of Massachusetts with charming architecture, beautiful landscape, and quirky islanders, The Beekeeper’s Daughter is “a multigenerational banquet of love…one of the most engrossing reads of my year” (Elin Hilderbrand).

Santa Montefiore had me at Secrets of the Lighthouse, that was an audio read for me and I loved it.
With

Written with words that drew me in and kept my attention right to the end.  Fans of Lucinda Riley and JoJo Moyes will enjoy this also.
Posted by Margaret @ JustOneMoreChapter at 11:23 PM