IS IT REALLY HARDER TO WRITE HISTORICALS?
Guest blog post by Alison McMahan

Here's something I hear all the time: "I could never write historical. Too much work! All that research. How do you do it?"

And my answer always is: "Contemporary. I could never write it. Too much work! You have to make everything up. For historical, I need to know something, I look it up."

For example, describing a character's clothing. Luckily for me, when I was writing The Saffron Crocus, my historical mystery-romance set in 1643 Venice, there was art. Although much of the art was religious or allegorical, most of the painters used live models, so I could look at faces and bodies and get a visual start on a character. And I could use the clothing in portraits to dress my characters. 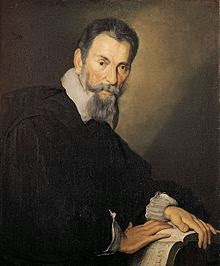 For example, Bernardo Strozzi's portrait of Monteverdi was painted in 1640, just three years before the events of The Saffron Crocus take place. I spent quite a lot of time staring into those slightly mismatched eyes while I listened to recordings of his music and came up with ways to incorporate him as a character into the story. 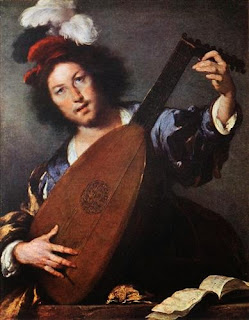 I modeled the character of Domenico on Strozzi's Lute Player. Not just the face and the clothes, but also the general character, a boy who has just turned into a man and is something of a dandy. It's hard to look at this painting and take the young man's ability to play the lute seriously. So in the story Domenico is wealthy and has good taste but he plays the lute like a hobbyist. Not like someone who devotes their life to music, as some of the other characters do.

In those two instances the paintings gave me a character whole, but often I had to cobble together information from various sources, including more than one painting, in order to put together a character. For the figure of Margherita, I looked at many paintings of St. Cecilia, including one by Bernardo Strozzi: 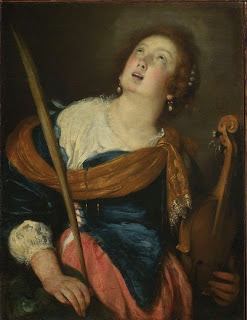 For Margherita, I was also inspired by his portrait of Judith with the head of Holofernes:
https://judith2you.files.wordpress.com/2013/04/judith-bernardo-strozzi.jpg 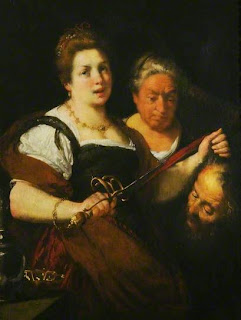 In both images I was struck by the women's expressions. St. Cecilia is transported by some heavenly inspiration, as Margherita could be when she was singing. Judith confronts the viewer directly, even though her servant isn't too sure about this. I felt that summed up Margherita's abilities to survive and flourish no matter what life threw at her.

I named a supporting character Cecilia, after my recently-deceased mother-in-law and because the 17th century in Venice worshiped that saint. But for her appearance I used another portrait of Strozzi's, a sweet old woman with a stare that dares you to confront the truth about yourself: 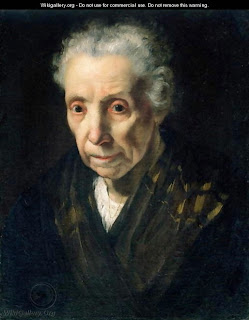 After using so many of Bernardo Strozzi's paintings as sources of information and inspiration, I felt I had to put him in the book too. He is an "off-screen" character in the book, in that the main characters hide out in his studio while he is away, but we never meet him directly.

Who was Bernardo Strozzi? He lived from 1581 to 1644, so the year my story takes place was the last year of his life. By then he was one of the most influential painters of the 17th century, especially in Genoa and Venice. He became a Capuchin monk but took a leave of absence (over two decades long!) to care for his mother and sister. After his sister married and his mother died the order insisted he return, but Strozzi left Genoa and went to Venice instead, where he had a large workshop.

( click on the cover to take you to my review) 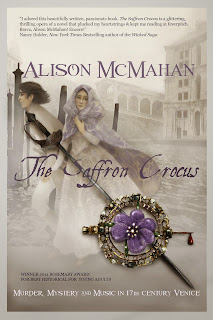 Winner of the 2014 Rosemary Award for Best Historical for Young Adults.

Venice, 1643. Isabella, fifteen, longs to sing in Monteverdi’s Choir, but only boys (and castrati) can do that. Her singing teacher, Margherita, introduces her to a new wonder: opera! Then Isabella finds Margherita murdered. Now people keep trying to kill Margherita’s handsome rogue of a son, Rafaele.

Was Margherita killed so someone could steal her saffron business? Or was it a disgruntled lover, as Margherita—unbeknownst to Isabella—was one of Venice’s wealthiest courtesans?

Or will Isabella and Rafaele find the answer deep in Margherita’s past, buried in the Jewish Ghetto?

Isabella has to solve the mystery of the Saffron Crocus before Rafaele hangs for a murder he didn’t commit, though she fears the truth will drive her and the man she loves irrevocably apart.

Posted by Margaret @ JustOneMoreChapter at 10:21 PM