The Traitor's Daughter by Barbara Kyle 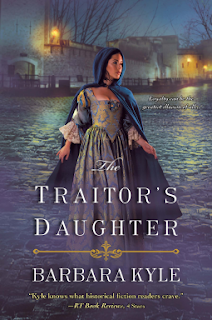 In 1582, England is gripped by the fear of traitors. Kate Lyon, tainted by her exiled mother's past treason, has been disowned by her father, Baron Thornleigh. But in truth, Kate and her husband Owen are only posing as Catholic sympathizers to gain information for Queen Elizabeth's spymaster. Kate is an expert decoder. The deception pains her, but she takes heart in the return to England of her long estranged brother Robert. If only she could be sure where his loyalties lie...

Kate and Owen's spying yields valuable intelligence: English Catholics abroad are spearheading an invasion that would see Elizabeth deposed—or worse—in favor of Mary, Queen of Scots. Kate takes on the dangerous role of double agent, decoding and delivering letters the exiles send Mary. But when lives and fortunes hang by the thinnest threads, betrayal is only a whisper away...

A brilliant blend of Tudor history and lush storytelling, The Traitor's Daughter is a riveting, passionate novel of loyalty, heartbreak, and one woman's undaunted courage.

The 7th book in the Thornleigh Series is out!  It is no secret that this is a favorite series of mine.  I started out with the audio version and the last 3 in book format.  Both are great and though they can be read alone I highly recommend starting at the beginning with The Queen's Lady.

This series is rich in historical detail, true to the time period and centers around real historical figures, though the Thornleighs are fictional.  This book isn't as action packed as previous ones, but it was still hard to put done.  Barbara Kyle has a way of making me care about this family, they live in a era of uncertainty, the conflict between Queen Elizabeth and Mary Queen of Scots plays center stage here.

What always strikes me with this series is not the always outward battles but the inner struggles the key players have.  With The Traitor's Daughter Kate Lyon, daughter of Adam Thornleigh has been disowned, she married someone supposedly opposed to Queen Elizabeth.  Her long lost brother makes his appearance on English soil and Kate is in turmoil.  Who can blame her, the guilt of their separation, he father's rejection when he doesn't know all the facts and equally as important is can she trust Robert?  I like Kate, she is strong and determined, courageous but also confused and alone, living in the Tudor era was hard enough without the full support of family.

In the past I have found series tend to get a little stale and dull when it gets too long.  That is not the case here, each book has its own story line, the characters intertwine with fresh glimpses at Tudor England.  I have not heard that this is the final book in series, so looking forward to the next installment.

Posted by Margaret @ JustOneMoreChapter at 12:46 PM