A Pledge of Better Times by Margaret Porter 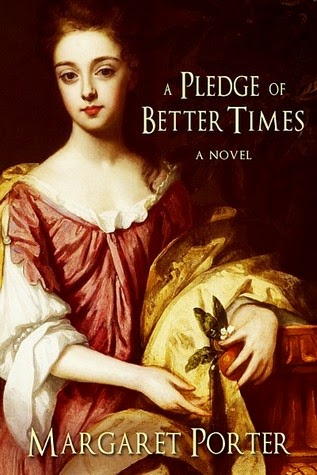 A sweeping tale of ambition, treachery, and passion…

Political and religious turmoil bring about revolution and yet another coronation before Charles returns to claim his promised bride. As companion to Queen Mary II, Diana has followed her de Vere forbears into royal service. She expects Charles to abandon his military career after marriage, but he proves unwilling to join the ranks of the courtiers he despises and mistrusts.

In palace corridors and within their own household the young duke and duchess confront betrayals, scandals, and tragedies that threaten to divide them. And neither the privileges of birth nor proximity to the throne can ensure their security, their advancement—or their happiness.

ebook provided as part of tour
****
This is a time period that I was totally unfamiliar with, which is the main reason I wanted to be part of this tour. The first thought that stuck me while reading this book was the authors vast knowledge of the time period as well as her passion for it.  Descriptive writing had my imagination going and I was able to visualize so much.  My interest in art has peeked because of books like this one.

Beginning in 1684 with the death of King Charles II the reader is introduced to a number of historical figures.  Though at times I had to stop and get my head around who's who's, but there is a nice list at the start of the book of who belongs to which House.

Since I am not overly familiar with the women of this time period I can't say how well known Diana is, for myself I loved reading her story.  The authors writing style made it so easy to get lost in this story.  Using actual historical documentation Margaret Porter has stayed true to history and very nicely filled in the gapes. The author notes are always a favorite of mine, no exception with A Pledge of Better Times, again attesting to the amount of research that has gone into this book.

Praise for A Pledge of Better Times

“Meticulously researched and offering an impressive cast of real life characters brought to vibrant life, A Pledge of Better Times expertly captures the drama, passions, politics and religious turmoil of England at the turn of the 18th century. Margaret Porter crafts her story with exquisite detail, transporting the reader into a world full of intrigue, scandal, and breathtaking danger . . . a masterful writer.” – Award-winning author M. Reed McCall

“With elegant prose and vivid detail, A Pledge of Better Times sweeps you into late Stuart England, transforming the lesser known adversities and triumphs of Lady Diana de Vere and Charles Beauclerk into a beautiful love story you won’t forget.” – Marci Jefferson, author of Enchantress of Paris and Girl on the Golden Coin

“A portrait of Diana de Vere as rich as the portraits that grace British museums and palaces.” – Christy K Robinson, author of Mary Dyer Illuminated

“The sparkling, dangerous, enticing post-Restoration period comes to vivid life! Porter gives us a wonderful, complicated heroine in Diana, drawing us deep into her world . . . . I couldn’t stop reading!” – Amanda Carmack, author of Murder in the Queen’s Garden: An Elizabethan Mystery Margaret Porter is an award-winning, bestselling novelist whose lifelong study of British history inspires her fiction and her travels. A former stage actress, she has also worked in film, television, and radio.