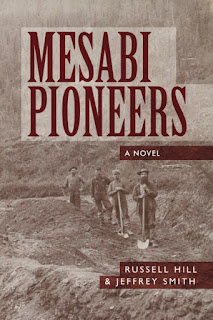 In the early 1890s, a group of brothers discovered iron ore in the dense pine woods of northern Minnesota. Mesabi Pioneers tells the story of the immigrants who dug that ore out of the ground, who carved towns from trees, and who built new lives for themselves and their families.

Arthur Maki, a Finnish immigrant known for his carpentry skills, has been hired by the persuasive and poetic Leonidas “Lon” Merritt to join a crew of explorers in the forest. From this remote and formidable locale, Arthur must construct a camp and foster a community into which he can bring his wife and son.

The camp, which the Merritts call Mountain Iron, sits on what Lon believes to be a huge lode of iron ore. However, the rest of the world thinks the Merritts are crazy. While Arthur builds a camp with a Chippewa Indian everyone calls Charlie and a French-Chippewa fur trader named Richardson, the other members of the team explore the surrounding woods for more caches of iron. When a second lode is discovered at Biwabik, Arthur and the rest of the crew know the finding is real. And the iron mining world knows it, too.

As the mine gets deeper and mining operations expand, the camp crowds with a diversity of ethnic and cultural groups. Tragedy strikes in ways large and small. And it is from the ashes of destruction that Arthur finds the community he has been seeking.


I love reading about places, events and times that are unfamiliar to me as well as discovering talented authors along the way.  Such is the case with Mesabi Pioneers.

Rich in details and written with feeling and emotion the authors were able to convey what took place at the Sleeping Giant .  The writing made it very easy to visualize the landscape, those harsh winters, the prejudices, and all the struggles that went with mining ore.  This was the 1890's, there are no modern conveniences add to that the separation from family and the financial hardships were just some of the issues.  It was a time of striking it rich, but this book showed it isn't a quick return but rather a lot of hard work and uncertainty.

I would love for this to be a series, to read more about the life of Arthur, Minnie and the family, the author has made me care about them and the future.

“…a refreshingly enjoyable read… Hill and Smith kindle complicated emotions, important questions and a driving curiosity about Northern Minnesota’s Mesabi Iron Range…The novel give(s) us a remarkable point of view, a vision of the Iron Range before it was anything like our modern understanding of the place. The size of the forest, the difficulty of travel, the majesty of the Missabe hills before they were opened up and moved like chess pieces: we see all of this in fresh prose.” -Aaron Brown, Hibbing Daily Tribune and minnesotabrown.com

“Hill and Smith pepper their story with some very good character development, plenty of sarcastic humor, and a good deal of research into a period never before explored in historical fiction. In their handling, the enterprising and occasionally cutthroat, bygone world of iron mining comes vividly alive. A strong debut installment.” -Charlotte Kirsch, Historical Novel Society

“In Mesabi Pioneers, Jeffrey Smith has skillfully crafted a wonderful story that respects the historical facts while bringing the experience of these pioneers to life. This book is a steeped in the social history and physical geography of this region in Minnesota that played such a significant role in the economic rise of the United States. In a few words, this is good creative writing with an enjoyable style.” -James Dilisio, author Maryland Geography

“What a fascinating story, with finely drawn characters and compelling subject matter. The authors take us inside the hearts and souls of newly arrived immigrant pioneers, full of hope and promise, who accomplished extraordinary feats under dire circumstances; and the Native Americans who watched their homeland undergo such dramatic and irrevocable change. I highly recommend it.” -Kathryn Leigh Scott, actress and author, Down and Out in Beverly Heels 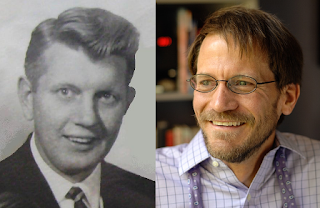 Dr. Russell Hill was born and raised on Minnesota’s Iron Range. During World War II he served in Naval Intelligence, receiving several prestigious medals for his service. After the War he received his doctorate from the University of Minnesota and began a long and successful teaching career. Hill passed away peacefully in 2011, surrounded by his beloved family. He was 85-years-old.

Jeffrey Smith began his love of letters at fourteen on a Smith-Corona electric typewriter borrowed from his father. He is a full-time writer, homemaker and stay-at-home parent. He is also an accomplished distance runner, completing 16 marathons, seven 24-hour relay races, and multiple ultra-runs, including several 100-mile races.

Posted by Margaret @ JustOneMoreChapter at 9:53 AM