I am happy to have D.W. Bradbridge with a special guest post today.  He is the author of The Winter Siege (which I really enjoyed) and his latest release of A Soldier of Substance.

How Did We Ever Forget about Lathom House? 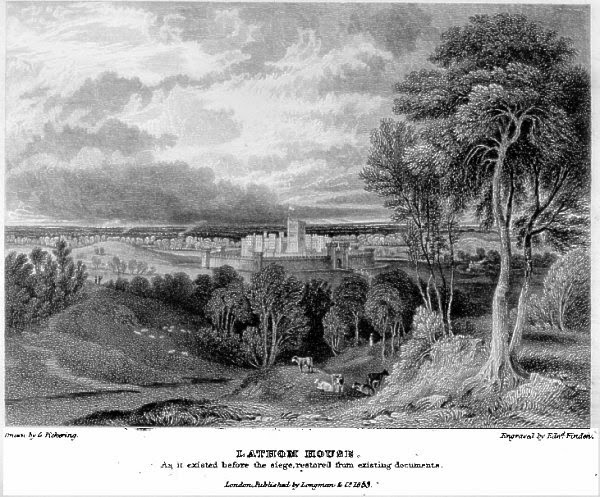 If you stand with your back to the Chapel of St John the Divine at Lathom Park you can see the area of raised ground where it is believed Lathom House, the Earl of Derby’s huge fortified mansion once stood, a building, according to an old ballad, ‘so spacious that it can receive, Two Kings, their trains and all.’ Today, however, not one stone remains of the original building besieged by the Parliamentary forces of Colonel Alexander Rigby during the English Civil War. This is a major irony, not least because Rigby, humiliated by his failure to capture the house and shown to be as incompetent a commander as he was vindictive, had initially set out to reduce Lathom “as if it had never been.” Although he was defeated by the indomitable will of his nemesis, the unwavering and impressive Countess of Derby, Lady Charlotte de Tremouille, the house was eventually pulled to the ground, as he would have wished.

Considering the dramatic nature of Lady Charlotte de Tremouille’s valiant defense of Lathom House with only three hundred men against a vastly superior parliamentary force, it is a wonder that the story is not more widely known today. Unless you grew up in Ormskirk or are a Civil War enthusiast, it is unlikely that you will ever have heard about Lathom. This was, however, not always so.

Indeed, up until the end of the 19th century, the tale of Lady Derby’s exploits retained a much more prominent place within the national consciousness, spawning a number of books and poems, the best known of which is William Harrison Ainsworth’s novel The Leaguer of Lathom. Even at the time of the siege, Lady Derby was eulogized by those on the royalist side, the Scottish Dove newspaper, for example, famously pointing out that she had ‘stolen the earl’s breeches’. Over the last hundred years, however, the details surrounding the First Siege of Lathom House (there were, in fact, two sieges) have gradually drifted into the backwaters of history.

This is a shame, because the events which took place between March and May 1644 form the basis for a captivating adventure story (or alternatively, given the abject incompetence of the parliamentary forces at times, an engaging comedy film or mini-series – I can imagine a series of Blackadder being set here).
The reason, in my opinion, why the Siege of Lathom House offers such rich pickings for a novelist or screenwriter, lies in the fantastic array of characters involved in the siege.

There is Lady Derby herself, described by historian Colin Pilkington as being ‘as devious as Elizabeth I, as inflexible as Mrs Thatcher and with the physical presence of an Amazon.’ She is backed up by a portly, scheming cleric (The Reverend Samuel Rutter – her main advisor), a brave and committed seventeen year old ensign (Edward Halsall – author of the Siege Journal), an experienced Scottish mercenary (William Farmer – the Captain of the House) and the wise old politician William Farrington.

The severe and humourless Rigby, on the Parliamentary side, was supported by a similar collection of fine characters such as the respected commander Ralph Assheton, who saw Rigby for what he was. There was the arrogant vertically-challenged Welshman in charge of the artillery, Thomas Morgan (uncle of the famous buccaneer, Captain Henry Morgan), an incompetent engineer called Browne and the enigmatic William Bootle, an ex-porter in the Earl of Derby’s household, and employed as Rigby’s resident expert on the interior of the house.

The myriad possibilities offered by such a fascinating array of characters are something, which I, personally, found hard to resist, and from a selfish viewpoint I have been grateful (if somewhat surprised) that Lady Charlotte’s story has remained in relative obscurity in recent years. Surely, however, this should not remain so. Isn’t it time that this Iron Lady of Lancashire was recognized once again? 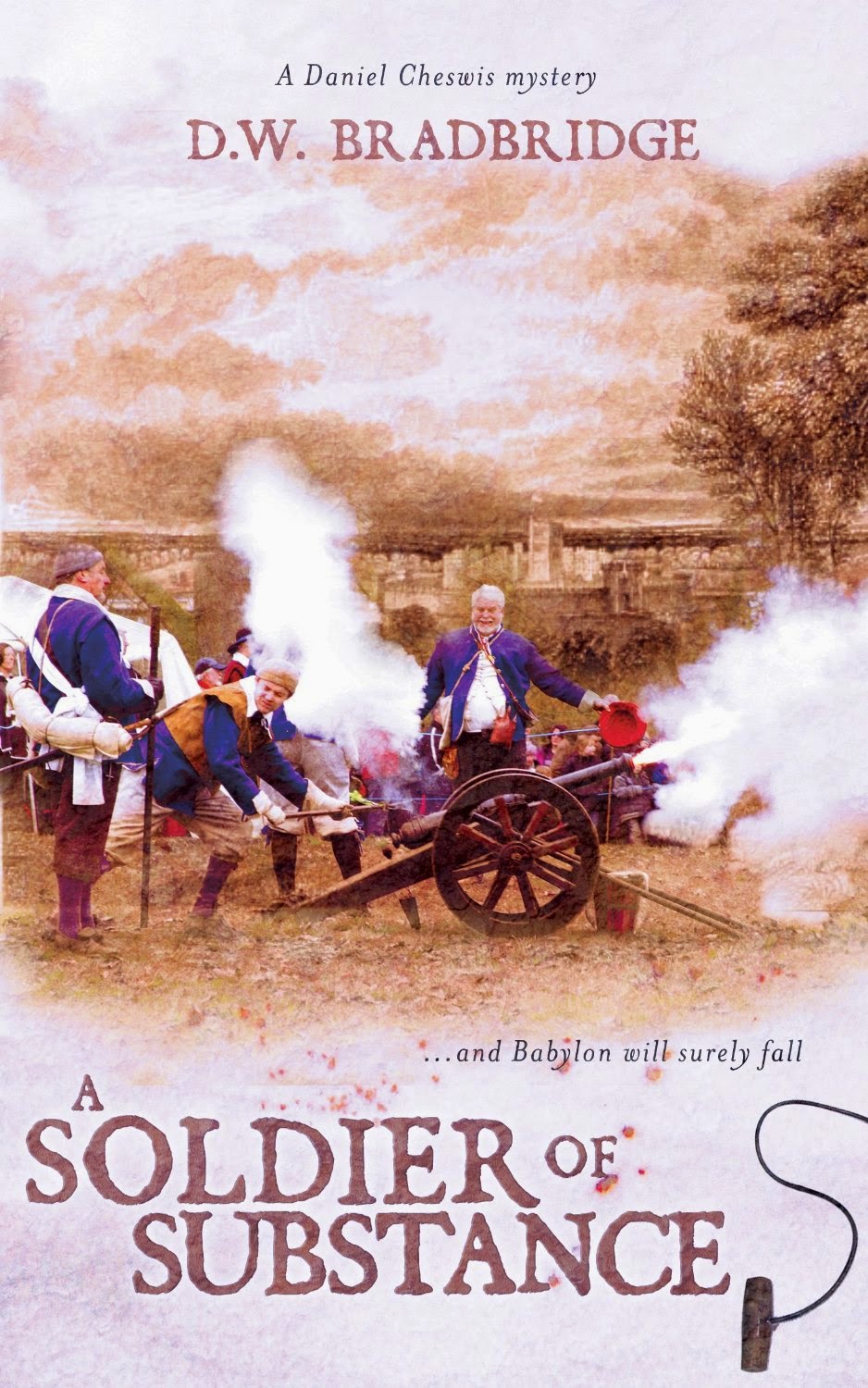 1644. The smoke of parliamentary musket, cannon, and mortar fire is in the air around the royalist stronghold of Lathom House. Though guards still stand atop its walls, it is besieged on all sides, and it is only a matter of time until the house, along with its embittered and unwavering countess, Lady Charlotte de Tremouille, falls to Parliament’s might. Yet somehow, a royalist spy still creeps, unseen, through its gates, and brings the countess Parliament’s secrets.
Barely recovered from the trials of the last few months, Daniel Cheswis is torn from his family and sent north, to uncover the identity of the traitor; though before he can even begin, Cheswis finds himself embroiled in a murder. A woman has been garrotted with cheese wire in her Chester home, suggesting there is more than just the usual hatreds of war at play.
As lives are lost and coats are turned on both sides, Cheswis is tasked with finding the murderer, uncovering the traitor, and surviving his soldierly duty long enough to see Lathom House fall. 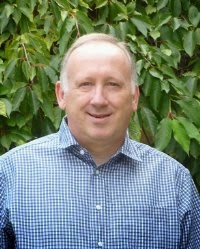 D.W. Bradbridge was born in 1960 and grew up in Bolton. He has lived in Crewe, Cheshire since 2000, where he and his wife run a small magazine publishing business for the automotive industry.

“The inspiration for The Winter Siege came from a long-standing interest in genealogy and local history. My research led me to the realisation that the experience endured by the people of Nantwich during December and January 1643-44 was a story worth telling. I also realised that the closed, tension-filled environment of the month-long siege provided the ideal setting for a crime novel.

“History is a fascinating tool for the novelist. It consists only of what is remembered and written down, and contemporary accounts are often written by those who have their own stories to tell. But what about those stories which were forgotten and became lost in the mists of time?

“In writing The Winter Siege, my aim was to take the framework of real history and fill in the gaps with a story of what could, or might have happened. Is it history or fiction? It’s for the reader to decide.”
For more information please visit D.W. Bradbridge’s website. You can also find him on Facebook and follow him on Twitter.

Posted by Margaret @ JustOneMoreChapter at 12:16 PM