The Girl Who Came Home: A Novel of the Titanic by Hazel Gaynor 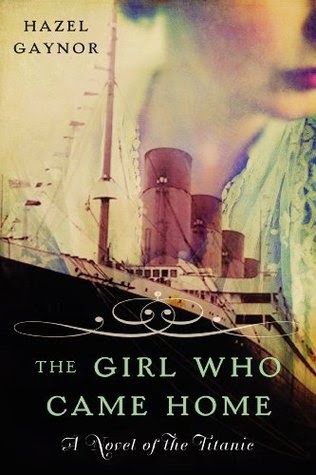 A voyage across the ocean becomes the odyssey of a lifetime for a young Irish woman. . .

Fourteen members of a small village set sail on RMS Titanic, hoping to find a better life in America. For seventeen-year-old Maggie Murphy, the journey is bittersweet. Though her future lies in an unknown new place, her heart remains in Ireland with Séamus, the sweetheart she left behind. When disaster strikes, Maggie is one of the few passengers in steerage to survive. Waking up alone in a New York hospital, she vows never to speak of the terror and panic of that fateful night again.

Adrift after the death of her father, Grace Butler struggles to decide what comes next. When her great-grandmother Maggie shares the painful secret about Titanic that she's harbored for almost a lifetime, the revelation gives Grace new direction—and leads both her and Maggie to unexpected reunions with those they thought lost long ago.

Inspired by true events, The Girl Who Came Home poignantly blends fact and fiction to explore the Titanic tragedy's impact and its lasting repercussions on survivors and their descendants.


Paperback, 384 pages
Published April 1st 2014 by William Morrow Paperbacks
audio - public library
****
This book lent itself quite nicely to audio format, though I am pretty sure I would have liked it if I had read it also.

Jumping back and forth in time was a nice break between the 2 story lines.  Based on the fact that 14 individuals from a small village in Ireland did in fact set sail on the Titanic.  At times parts of the story were predictable it was still  enjoyable to listen to. The author showed the class distinctions not just on board the ship but in other aspects of life during that time period.

Maggie resolved never to speak about what happened that night was genuine, you can feel the ice cold and black night understanding her frame of mind and reasoning behind this decision.  Her great granddaughter Grace is a loyal daughter but I would have liked more insight into Grace's mother and her struggles, just to back up why Grace had to support her for 2 years - it might be just me, but that confused me a little.  Not that I don't understand grief, but what transpired during that time would have been nice to know, giving reasons for putting her life on hold.

This book brought to life the story of the Titanic, not just through the eyes of the passengers but the crew as well and those waiting on end side of the ocean for news.


Hazel Gaynor is a new author to me, she has just released, A Memory of Violets and I must say both these covers are gorgeous.

Posted by Margaret @ JustOneMoreChapter at 11:06 PM