The Tudor Vendetta (The Spymaster Chronicles #3) by C.W. Gortner 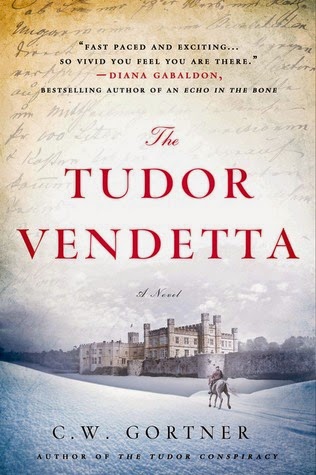 Upon the death of Mary I (Bloody Mary), Elizabeth I takes the throne and Brendan Prescott is called to aid the young queen amid a realm plunged into chaos and a court rife with conspiracy

London, 1558. Queen Mary is dead, and 25-year old Elizabeth ascends the throne. Summoned to court from exile abroad, Elizabeth’s intimate spy, Brendan Prescott, is reunited with the young queen, as well as his beloved Kate, scheming William Cecil, and arch-rival, Robert Dudley. A poison attempt on Elizabeth soon overshadows her coronation, but before Brendan can investigate, Elizabeth summons him in private to dispatch him on a far more confidential mission: to find her favored lady in waiting, Lady Parry, who has disappeared during a visit to her family manor in Yorkshire.

Upon his arrival at the desolate sea-side manor where Lady Parry was last seen, he encounters a strange, impoverished family beset by grief, as well as mounting evidence that they hide a secret from him. The mystery surrounding Lady Parry deepens as Brendan begins to realize there is far more going on at the manor than meets the eye, but the closer he gets to the heart of the mystery in Vaughn Hall, the more he learns that in his zeal to uncover the truth, he could be precipitating Elizabeth’s destruction.

From the intrigue-laden passages of Whitehall to a foreboding Catholic manor and the deadly underworld of London, Brendan must race against time to unravel a vendetta that will strike at the very core of his world—a vendetta that could expose a buried past and betray everything he has fought for, including his loyalty to his queen.


Published October 21st 2014 by St. Martin's Griffin
arc - netgalley
****
One of the things that I loved about this book was that I had no clue what it was about.  Having read everything that this author has written it was just a given that this would be next.  Oh I knew is was the continuing story of Brendan Prescott, Queen Elizabeth was on the throne but other then that I had no idea.  That is part of the reason that I don't do play by play comments in my reviews.  I like the element of the unknown, discovering as I read and hope my readers do too.

After reading The Tudor Secret if anyone told me how this series was going to end I wouldn't have believed it.  With so many books available that take place during the reign of Queen Elizabeth this book brought something new and original. The plot I found intriguing and suspenseful.  Having read my fair share of mysteries I can't help trying to figure things out before it is revealed.  The Tudor Vendetta had me guessing, sure  that I've figured it out only to come upon more twists and turns, that kept me guessing right till the end.

Brendan Prescott is a likeable character, knowing his secrets and drive added much to this story.  I am not a fan of Robert Dudley's so the way he was portrayed here just confirmed my feelings.

The authors writing style is smooth and it wasn't hard to get lost in this story. With authentic historical details I found this to be a very entertaining read and am sad to see this series end.
Posted by Margaret @ JustOneMoreChapter at 12:30 AM