Where the Forest Meets the Stars by Glendy Vanderah 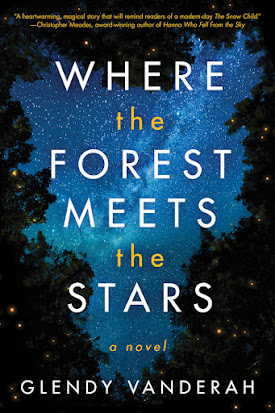 After the loss of her mother and her own battle with breast cancer, Joanna Teale returns to her graduate research on nesting birds in rural Illinois, determined to prove that her recent hardships have not broken her. She throws herself into her work from dusk to dawn, until her solitary routine is disrupted by the appearance of a mysterious child who shows up at her cabin barefoot and covered in bruises.

The girl calls herself Ursa, and she claims to have been sent from the stars to witness five miracles. With concerns about the child’s home situation, Jo reluctantly agrees to let her stay—just until she learns more about Ursa’s past.

Jo enlists the help of her reclusive neighbor, Gabriel Nash, to solve the mystery of the charming child. But the more time they spend together, the more questions they have. How does a young girl not only read but understand Shakespeare? Why do good things keep happening in her presence? And why aren’t Jo and Gabe checking the missing children’s website anymore?

Though the three have formed an incredible bond, they know difficult choices must be made. As the summer nears an end and Ursa gets closer to her fifth miracle, her dangerous past closes in. When it finally catches up to them, all of their painful secrets will be forced into the open, and their fates will be left to the stars.

In this gorgeously stunning debut, a mysterious child teaches two strangers how to love and trust again.

Paperback, 332 pages
Published March 1, 2019
by Lake Union Publishing
4.5/5 stars
This is yet again one of those 'Instagram made me do it' reads. The cover was also calling my name.

The past couple years have been hard (that’s putting it mildly) for Joanna, but a summer in the country watching the habits of nature seem to be what the doctor ordered. She craves the solitude and quiet. Then a 9 year old alien child appears out of no where.

What a pleasure this was to read. As Jo slowly bonds with Ursa so does this reader. How hard can it be to witness 5 miracles? What follows is a tender story of trust, hearts opening and healing. Yes there were a few times I had to suspend my belief but that was part of the magic to this mesmerising story.

When the Forest Meets the Stars is a heart warming mysterious story that was hard to put down, it’s well written and has me craving campfires and marshmallows.

An awesome debut by Glendy Vanderah, I can’t wait to see what comes next.

This book was part of my 2022 Reading Off My Shelf Challenge (#14)
Posted by Margaret @ JustOneMoreChapter at 8:52 AM