The Girl They Left Behind: A Novel by Roxanne Veletzos 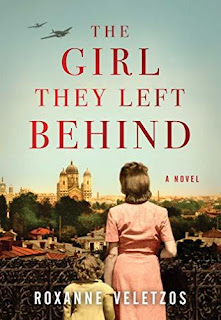 A sweeping historical romance that is “gripping, tragic, yet filled with passion and hope” (Kate Quinn, New York Times bestselling author), offering a vivid and unique portrayal of life in war-torn 1941 Bucharest during World War II and its aftermath—perfect for fans of Lilac Girls and Sarah’s Key.

On a freezing night in January 1941, a little Jewish girl is found on the steps of an apartment building in Bucharest. With Romania recently allied with the Nazis, the Jewish population is in grave danger so the girl is placed in an orphanage and eventually adopted by a wealthy childless couple who name her Natalia. As she assimilates into her new life, she all but forgets the parents who were forced to leave her behind.

As a young woman in Soviet Romania, Natalia crosses paths with Victor—an important official in the Communist regime that she used to know as an impoverished young student. Now they are fatefully drawn into a passionate affair despite the obstacles swirling around them and Victor’s dark secrets.

When Natalia is suddenly offered a one-time chance at freedom, Victor is determined to help her escape, even if it means losing her. Natalia must make an agonizing decision: remain in Bucharest with her beloved adoptive parents and the man she has come to love, or seize the chance to finally live life on her own terms, and to confront the painful enigma of her past.

Paperback, 368 pages
Published October 9, 2018 by
Atria Books
4.5/5 stars
This book came highly recommended so I jumped at the chance to do a combo read and audiobook. It wasn’t until I finished and read the author notes that I realized this book is based on the author's own family’s history. Her mother was the little girl left behind, making this book all the more compelling.

This story begins in January 1941 with the hardest decision a couple must make, I can’t even imagine. What follows is decades of struggle for this girl now called Natalia. Adopted by loving parent, growing up during the war, then behind the Iron Curtain with all the struggles.

The Girl They Left Behind is a well researched and well written captivating story of hope, family and history. I never knew about the Bucharest Pogroms or what living behind the Iron Curtain was like. This book opened my eyes to how much history I don't know. I highly recommend to those that love historical fiction or just a good read.
This book was part of my 2022 Reading Off My Shelf Challenge #4/17
Posted by Margaret @ JustOneMoreChapter at 8:19 PM