The Second Empress: A Novel of Napoleon's Court by Michelle Moran 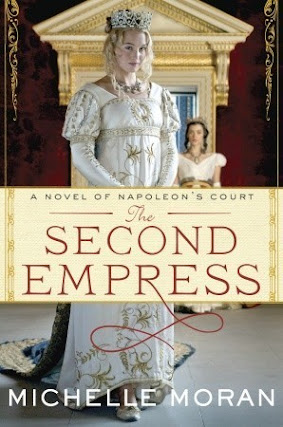 National bestselling author Michelle Moran returns to Paris, this time under the rule of Emperor Napoleon Bonaparte as he casts aside his beautiful wife to marry a Hapsburg princess he hopes will bear him a royal heir.
After the bloody French Revolution, Emperor Napoleon’s power is absolute. When Marie-Louise, the eighteen year old daughter of the King of Austria, is told that the Emperor has demanded her hand in marriage, her father presents her with a terrible choice: marry the cruel, capricious Napoleon, leaving the man she loves and her home forever, or say no, and plunge her country into war.

Marie-Louise knows what she must do, and she travels to France, determined to be a good wife despite Napoleon’s reputation. But lavish parties greet her in Paris, and at the extravagant French court, she finds many rivals for her husband’s affection, including Napoleon’s first wife, Joséphine, and his sister Pauline, the only woman as ambitious as the emperor himself. Beloved by some and infamous to many, Pauline is fiercely loyal to her brother. She is also convinced that Napoleon is destined to become the modern Pharaoh of Egypt. Indeed, her greatest hope is to rule alongside him as his queen—a brother-sister marriage just as the ancient Egyptian royals practiced. Determined to see this dream come to pass, Pauline embarks on a campaign to undermine the new empress and convince Napoleon to divorce Marie-Louise.

As Pauline's insightful Haitian servant, Paul, watches these two women clash, he is torn between his love for Pauline and his sympathy for Marie-Louise. But there are greater concerns than Pauline's jealousy plaguing the court of France. While Napoleon becomes increasingly desperate for an heir, the empire's peace looks increasingly unstable. When war once again sweeps the continent and bloodshed threatens Marie-Louise’s family in Austria, the second Empress is forced to make choices that will determine her place in history—and change the course of her life.

Based on primary resources from the time, The Second Empress takes readers back to Napoleon’s empire, where royals and servants alike live at the whim of one man, and two women vie to change their destinies.
Kindle Edition, 448 pages
Published August 14, 2012
by Crown (Random House Imprint)
4/5 stars
As much as I love historical fiction I usually shy away from France. I’m not really sure why, I love the country but court life just hasn't grabbed me, could be all  the king Louis's just confused me. But for some authors I will make the exception and Michelle Moran is one of those exceptions. It’s been a while since I’ve read one of her books and finding this buried on my Kindle I started reading

Told from 3 different POVS around the year 1809 I was treated to look into the life at the French court of Napoleon. Paul, a Haitian servant to Pauline, sister to Napoleon and alternating with Maria Louise , a 19 year old destined to be Napoleon's 2nd wife.
Through Paul I glimpsed the brother and sister relationship between Pauline and her brother Napoleon like I said I don’t know much French history but their relationship was kind of icky, and possibly incestuous. She isn't a likeable character, but I did feel sorry for her.  Her's is also the another view point.

Maria Louise,  the second empress also a distant relative of Marie Antoinette. From Austria she was sent for but not everyone is happy about it, especially her, having never even met Napoleon before.

What I loved about this book was the fact the author used real letters and other documentation not just in her research but throughout the story. She stayed true to history as to what took place making this book have that authentic feel.  As you can read from the blurb it is a it is not a peaceful time.
Like I stated before Michelle Moran is a favourite of mine.  Here are some of her others books I've enjoyed. 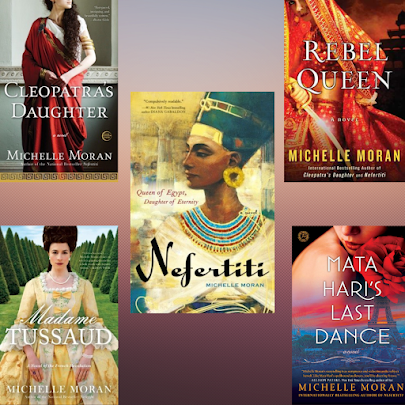 Posted by Margaret @ JustOneMoreChapter at 3:17 PM