Until We Meet by Camille Di Maio 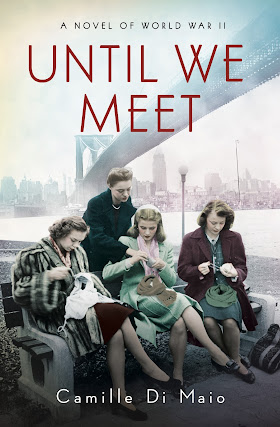 Margaret Beck is proud of her work at the Brooklyn Navy Yard sewing stars onto the Stars and Stripes, but she yearns to contribute to the war effort more meaningfully. She's angling for a promotion to the mechanic section, but she doesn't want to wait to make a difference. So with her two best friends, she decides to start a knitting club, where they will knit socks for the boys at the front. Thinking of the young men so far from the comforts of home, Margaret slips a note into her first pair of socks, offering a connection to an unknown soldier that will forever change her life.

For Thomas Powell serving his country was not only his duty but an honor, and he wore his Army uniform with pride. Yet being on the frontlines, witness to unspeakable tragedy and despair, has shaken him. The one shining light is Margaret’s letters—written to his best friend William. When William is killed, Tom doesn’t have the heart to write the warm, generous, and hopeful Margaret and tell her the news. Not about William’s death and not about the way he’s fallen in love with her—across an ocean, amidst the darkness of war, and through the letters she never intended for him.

Instead, he picks up his pen and responds to Margaret’s latest letter, signing it William. As the war intensifies, so does the affection between Tom and Margaret, and Tom knows he owes her the truth. But as he heads out for his most dangerous mission yet, Tom wonders—will he ever get the chance to tell her?
Kindle edition, 384 pages
Expected publishing date, March 1, 2022
by Forever (Grand Central Publishing)
3.5/5 stars
Camille Di Maio is not a new author for me, I enjoyed her book The First Emma for its historical lesson and interesting characters.  Until We Meet is another historical fiction but set during the war.
While the blurb talks about Margaret and Thomas, there is more to this story.  With 3 women working in New York during the war, it's a story of their friendship, uncertainty and of waiting. I loved how the correspondence started and what it yielded even though laced with heartache.
Overseas Thomas and 2 new friends bond over training and action. This part was a little slow for me, it wasn't until the last half of the book where things took off and then it got rather gritty.
Again I enjoyed the authors writing style, the back and forth played out nicely.  The ending was nice though I will confess that I wasn't totally taken with a few aspects of it.  .
Until We Meet is unique story that I recommend for the historical fiction lovers and those that just like a good book to read.
My thanks to Forever Books for a digital ARC in exchange for a honest review.
Posted by Margaret @ JustOneMoreChapter at 10:28 PM