The Higher Power of Lucky by Susan Patron 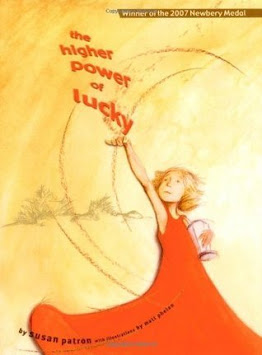 Believing that her French guardian is about to abandon her to an orphanage in the city, ten-year-old Lucky runs away from her small town with her beloved dog by her side in order to trek across the Mojave Desert in this Newbery Medal–winning novel from Susan Patron.

Lucky, age ten, can't wait another day. The meanness gland in her heart and the crevices full of questions in her brain make running away from Hard Pan, California (population 43), the rock-bottom only choice she has.

It's all Brigitte's fault -- for wanting to go back to France. Guardians are supposed to stay put and look after girls in their care! Instead Lucky is sure that she'll be abandoned to some orphanage in Los Angeles where her beloved dog, HMS Beagle, won't be allowed. She'll have to lose her friends Miles, who lives on cookies, and Lincoln, future U.S. president (maybe) and member of the International Guild of Knot Tyers. Just as bad, she'll have to give up eavesdropping on twelve-step anonymous programs where the interesting talk is all about Higher Powers. Lucky needs her own -- and quick.

But she hadn't planned on a dust storm.

Or needing to lug the world's heaviest survival-kit backpack into the desert.

Hardcover, 144 pages
Published November 7, 2006
by Atheneum/Richard Jackson Books
3/5 stars
This book is part of my reading of the John Newbery Medal winners, The Higher Power of Lucky was the winner in 2007.
Told from Lucky's pov, a 10 year old who resides in a place called Hard Pan with a population of 43, one less when her mom died but then one more when her guardian, Brigitte showed up.  She likes to eavesdrop behind dumpsters, imagine things and begins to suspect her guardian doesn't want her any more.
Lucky is a visual story telling what life is like in a small place on the edge of a desert.  While I found it entertaining enough I did end up listening to the audio version for the last couple of hours.  The ending was fitting for the story but unlike other Newbery winners it didn't wow me.
This book was not only part of my 2022 Reading Off My Shelf Challenge (#12) but also my John Newbery Challenge.
Posted by Margaret @ JustOneMoreChapter at 8:00 AM