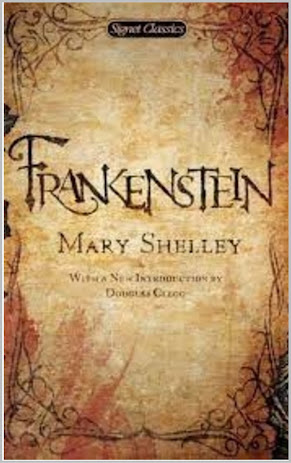 Horror. Romance. Science. A classic tale that would be a fright to miss!

The idea for the story came to the author, Mary Shelley, in a dream she had about a scientist who had created life and was horrified by what he had made. This Gothic-style romance is among the first of true science fiction novels, if not the first. A young scientist named Victor Frankenstein, after going through his own near-death experience, decides to play God and create life in the form of a grotesque creature, which turns into a nightmare. Through his experience, he learns that the gift of life is precious, not disposable. His journey and personal transformation has deeply affected readers.

Paperback, 255 pages
Audiobook, 8 hours, 35 minutes
Originally published  Jan 1, 1818
3.5 stars
Mary Shelley has been seen as a one-novel author in her life time with Frankenstein. However it wasn’t until years later that more books were discovered. After read Frankenstein I am inclined to read more.

I had no idea what to expect with this book. My only knowledge of this book was through the movie Young Frankenstein, so really nothing.

This is more than a story about a monster but rather Victor Frankenstein the creator. I actually felt sorry for the creature, he didn’t ask to be created yet he was and then abandoned. There isn't anything to tell how he was created, which would have been interesting.

Even though I had the book on my shelf I listened to the audio via Audible and the Plus Catalog (free reads for members.) the reader was Dan Stevens, he did a great job.

Narrator Dan Stevens (Downton Abbey) presents an uncanny performance of Mary Shelley's timeless gothic novel, an epic battle between man and monster at its greatest literary pitch. In trying to create life, the young student Victor Frankenstein unleashes forces beyond his control, setting into motion a long and tragic chain of events that brings Victor to the very brink of madness. How he tries to destroy his creation, as it destroys everything Victor loves, is a powerful story of love, friendship, scientific hubris, and horror.

Posted by Margaret @ JustOneMoreChapter at 7:00 AM

Email ThisBlogThis!Share to TwitterShare to FacebookShare to Pinterest
Labels: 2022, 2022 Reading off my shelf, Classic, Mary Shelley, New to me author