Waiting on Wednesday: the dutch girl by Donna Thorland 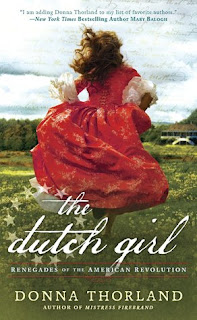 The acclaimed author of Mistress Firebrand and The Turncoat continues “her own revolution in American historical romance”* with another smart, sexy, swashbuckling novel set during the American Revolution.

Manhattan and the Hudson River Valley, 1778. The British control Manhattan, the Rebels hold West Point, and the Dutch patroons reign in feudal splendor over their vast Hudson River Valley estates. But the roads are ruled by highwaymen. Gerrit Van Haren, the dispossessed heir of Harenwyck, is determined to reclaim his inheritance from his decadent brother, Andries, even if that means turning outlaw and joining forces with the invading British. Until, that is, he waylays the carriage of beautiful young finishing school teacher Anna Winters…

Anna is a committed Rebel with a secret past and a dangerous mission to secure the Hudson Highlands for the Americans. Years ago, she was Annatje, the daughter of a tenant farmer who led an uprising against the corrupt landlords and paid with his life. Since then, Anna has vowed to see the patroon system swept aside along with British rule. But at Harenwyck she discovers that politics and virtue do not always align as she expects…and she must choose between two men with a shared past and conflicting visions of the future.