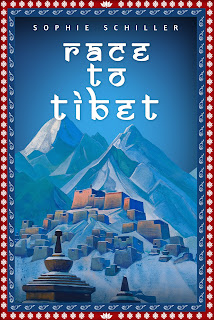 By 1889 Tibet is the last unexplored country in the world. Gabriel Bonvalot is determined to be the first Westerner to reach Lhasa but lacks a sponsor. When the Duke of Chartres promises to pay his expenses Bonvalot agrees, even after he learns he must bring along the Duke's wayward son, Prince Henri d'Orléans. Along the way Bonvalot meets Camille Dancourt, the wife of a missing surveyor, who attaches herself to the expedition in order to find her missing husband. During the journey the intrepid explorers are besieged by freezing temperatures, volatile winds, mountain sickness, hostile Tibetans, and duplicitous Chinese Mandarins. Nearing collapse, Bonvalot realizes they will have to resort to force if they ever wish to escape Tibet alive.


RACE TO TIBET is an adventure thriller that will take you on a suspenseful journey to the Roof of the World.

The Tibetan spoke again, but this time his voice changed. He began to chant as if he had gone into a hypnotic trance. He closed his eyes and recited a mantra that sounded like a prayer from another world.

"Our Oracle predicted that during the year of the Iron-Tiger the Jade Emperor would capture the golden bird and send her into exile, but a small army with metal sticks would sweep down from the north and rescue her. Once free the golden bird would fly to the Potala Palace to perform the sacred duty of acting as tutor and maidservant to the Dalai Lama. The Oracle said that for this great service, good fortune would follow the foreigners all the days of their lives. But if the golden bird is captured by the mandarins, they will lose their heads. She is called Pema, or lotus flower. Her true identity may not be known by anyone outside this tent, not even by your closest servants. For this reason, we call her the golden bird."

"I'll bear that in mind," said Bonvalot. "Don't worry, your golden bird will be safe with me. You may go in peace now."

Bonvalot led the visitors back to their horses while Pema stayed behind beside the tent, looking like a forgotten stupa on a windswept hill.

The Tibetans mounted their horses and galloped away. All that remained behind was the forlorn figure of Pema wrapped in her sheepskin coat, silent except for the humming of her prayer wheel. Her eyes followed their every movement.

"Now that we've got her, what do we do with her?" said Bonvalot, regarding the Tibetan girl with curiosity.

"I suppose our Christian duty is to feed her," said Father Dedeken. "And give her a warm place to sleep."

When Rachmed explained the situation to the caravan men, some of them objected to the intruder; others raised their eyebrows and cast suspicious glances in her direction, but otherwise they accepted Pema's presence, albeit guardedly.

Later, Bonvalot sat Pema down by the fire and offered her a bowl of tsampa and tea. When she became more comfortable, he urged her remove her shawl.

Reluctantly, the girl pushed away the shawl and when they caught a glimpse of her face in the light of the campfire, the men gasped: Pema was the most exquisite creature they had ever seen. She was beautiful in a mystical sort of way, with skin like polished white jade, rose petal lips, and black, almond-shaped eyes. Her hair was braided into dozens of tiny plaits that were bounded by a single strand of coral beads suspended from a golden disk on her forehead; around her neck she wore multiple strands of coral and turquoise necklaces, and in her hands she held a prayer wheel that she clutched like a golden scepter. Pema had an almost regal presence about her, like a royal consort. Or a goddess.

Sophie Schiller was born in Paterson, NJ and grew up in the West Indies amid aging pirates and retired German spies. Among other oddities her family tree contains a Nobel prize-winning physicist and a French pop singer. She loves stories that carry the reader back in time to exotic and far-flung locations. She was educated at American University, Washington, DC and lives in Brooklyn, NY. She is currently working on a new historical thriller set in the Caribbean.

Monday, November 23
Review at Svetlana's Reads and Views
Interview at Let Them Read Books
Spotlight at 100 Pages a Day

Thursday, November 26
Guest Post at Passages to the Past
Spotlight at Book Nerd

We have a signed paperback of Race to Tibet up for grabs! To enter, see the GLEAM form below.

– Giveaway ends at 11:59pm EST on November 27th. You must be 18 or older to enter.
– Giveaway is open internationally.
– Only one entry per household.
– All giveaway entrants agree to be honest and not cheat the systems; any suspect of fraud is decided upon by blog/site owner and the sponsor, and entrants may be disqualified at our discretion
– Winner has 48 hours to claim prize or new winner is chosen. Race to Tibet
Posted by Margaret @ JustOneMoreChapter at 12:30 AM