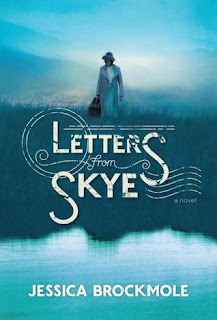 A sweeping story told in letters, spanning two continents and two world wars, Jessica Brockmole’s atmospheric debut novel captures the indelible ways that people fall in love, and celebrates the power of the written word to stir the heart.

March 1912: Twenty-four-year-old Elspeth Dunn, a published poet, has never seen the world beyond her home on Scotland’s remote Isle of Skye. So she is astonished when her first fan letter arrives, from a college student, David Graham, in far-away America. As the two strike up a correspondence—sharing their favorite books, wildest hopes, and deepest secrets—their exchanges blossom into friendship, and eventually into love. But as World War I engulfs Europe and David volunteers as an ambulance driver on the Western front, Elspeth can only wait for him on Skye, hoping he’ll survive.

June 1940: At the start of World War II, Elspeth’s daughter, Margaret, has fallen for a pilot in the Royal Air Force. Her mother warns her against seeking love in wartime, an admonition Margaret doesn’t understand. Then, after a bomb rocks Elspeth’s house, and letters that were hidden in a wall come raining down, Elspeth disappears. Only a single letter remains as a clue to Elspeth’s whereabouts. As Margaret sets out to discover where her mother has gone, she must also face the truth of what happened to her family long ago.


Sparkling with charm and full of captivating period detail, Letters from Skye is a testament to the power of love to overcome great adversity, and marks Jessica Brockmole as a stunning new literary voice.

My sincere apologizes to the author for taking so long to read this gem.  I won this (ebook) through the Historical Fictionistas group on Goodreads from the author when first released.  Hearing so many positive comments about Letters from Skye, lots comparing it to The Guernsey Literary and Potato Peel Pie Society, which is a favorite, I knew this one must also be read by myself.

Letters from Skye is told entirely through letters.  My first thoughts were that this would be superficial - how can one connect with both the characters and the plot?  I like my books with depth, where I not just connect with the players and the story but that is unique and engaging at the same time.  Also, this book takes place in two different time periods - WW I and WW II, remember all through letters.

From the synopsis above you can tell who are doing all the writing, so I won't go over that.  So my thoughts on Letters from Skye - I thoroughly enjoyed it!  Beginning with the easy banter back and forth between David and Elspeth, getting to know them it wasn't difficult to see where it would lead.  With the second story line showing the repercussions, conflicts and fitting conclusion.  My fears regarding depth of character and plot were unfounded, through these letters I really got to know not just David, Elspeth and Margaret but others as well.  I felt their struggles and the lasting effects these wars had.

There were twists and turns here, I little questions I had in the back of my mind were answered.  All in all a great debut that kept me absorbed right to the end.


Praise for Letters from Skye

“Letters from Skye is a captivating love story that celebrates the power of hope to triumph over time and circumstance.”—Vanessa Diffenbaugh, New York Times bestselling author of The Language of Flowers

“[A] remarkable story of two women, their loves, their secrets, and two world wars . . . [in which] the beauty of Scotland, the tragedy of war, the longings of the heart, and the struggles of a family torn apart by disloyalty are brilliantly drawn, leaving just enough blanks to be filled by the reader’s imagination.”—Publishers Weekly (starred review)

“Tantalizing . . . sure to please readers who enjoyed other epistolary novels like The Guernsey Literary and Potato Peel Pie Society.”—Stratford Gazette

“An absorbing and rewarding saga of loss and discovery.”—Kate Alcott, New York Times bestselling author of The Dressmaker

“A sweeping and sweet (but not saccharine) love story.”—USA Today

“[A] dazzling little jewel.”—Richmond Times-Dispatch
Posted by Margaret @ JustOneMoreChapter at 10:57 AM