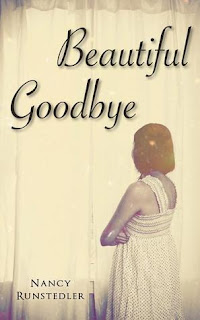 Maggie's life has been anything but easy lately. So when her best friend Gillian discovers a Ouija board in the attic, it's a welcome relief. While they'd rather be at the mall than babysitting Maggie's brother Cole, the girls figure it will be a fun way to spend a Saturday -- asking questions about boys and other teenage dilemmas. After all, it's just a game. Or is it?

Thinking nothing could possibly go wrong, the kids dive in, eager to test the new game, but discover the board will change their lives in ways they couldn't have imagined. The trio ends up with more than they bargained for and are thrust into a whirlwind journey. One from which they might never return, if they aren't careful.


Paperback, 152 pages
Published August 20th 2012 by Dundurn
****
Lately I seem to be reading more Young Adult HF, which is what Beautiful Goodbye is.  Written by Canadian author  Nancy Runstedler, this was released in 2012 - the publisher very gracious provided me with an arc (via Netgalley) for review.  My sincere apologies for not reviewing this little gem sooner.

At first I wasn't sure what to expect but it didn't take long to be immersed in this story.  There were times I found it to be a little choppy, some scenes not fully developed as it could have been.  But aside from that I found this to be an emotional and addictive read.  It's relatively short (152 pages) and I could not put it down.  The author made me care for Maggie, Cole and Hope, the things they have gone through and what the future holds.  The synopsis doesn't give too many details about the book (which I love) so I won't expound on that.  It wasn't an easy road they traveled, especially during the early part of WW I, but it was a journey that each of them had to face.  The story itself was intriguing and unique.

"Maggie's last thoughts before exhaustion claimed her were that her grief felt like an earthquake.  The intial blow devastated everything in it's path.  You grouped together, trying to recover and move on, even if it meant you'd lost the things most important to you.  But when you least expected it, an after shock would hit.  It might be days, it might be months or years.  Maggie knew whenever those tremors did hit she would not be alone and she would survive them."

Posted by Margaret @ JustOneMoreChapter at 10:13 PM