The Midwife's Revolt by Jodi Daynard 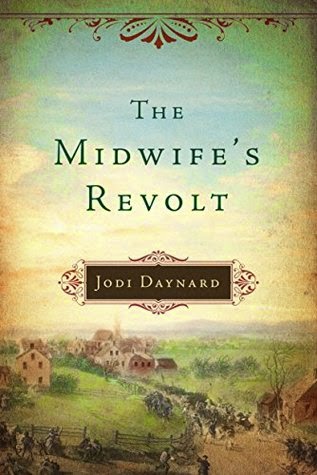 On a dark night in 1775, Lizzie Boylston is awakened by the sound of cannons. From a hill south of Boston, she watches as fires burn in Charlestown, in a battle that she soon discovers has claimed her husband’s life.

Alone in a new town, Lizzie grieves privately but takes comfort in her deepening friendship with Abigail Adams. Soon, word spreads of Lizzie’s extraordinary midwifery and healing skills, and she begins to channel her grief into caring for those who need her. But when two traveling patriots are poisoned, Lizzie finds herself with far more complicated matters on her hands—she suspects a political plot intended to harm Abigail and her family. Determined to uncover the truth, Lizzie becomes entangled in a conspiracy that could not only destroy her livelihood—and her chance at finding love again—but also lead to the downfall of a new nation.

I came away from The Midwife's Revolt with the feeling this book was a mix of history and friendship.  Lizzie Boylston is a young widow from Boston, a midwife and healter.  She is brave, strong and confident.  I couldn't help admiring her and how she deals with her lot in life.  In 1775 women were not expected nor encouraged to take care of themselves, but rather rely on a father, husband even the in-laws to provide for them. With all able bodied men off to war the work at her homestead showed her resilience. This book was a refreshing change.

Though Lizzie is a fictional character I like to imagine that isn't the case, her relationship with Abigail Adams brought out the political side of the story which I found intriguing.  I haven't read a lot of books taking place in the 1770's, so this was a learning experience as well as entertaining.

I liked Jodi Daynard's writing style, this is her debut and she is coming out of the the gate with a strong showing.  This book flowed nicely, easy to get lost in the story and it also shows the authors vast knowledge of the time period.  If you are a lover of HF, I encourage you to give this one a try.

Thank you to the publisher (via netgalley) for providing me an ebook copy for review purposes only.

Jodi Daynard is a writer of fiction, essays, and criticism. Her work has appeared in numerous periodicals, including the New York Times Book Review, the Village Voice, the Paris Review, AGNI, and the New England Review, as well as several anthologies. She is the author of The Place Within: Portraits of the American Landscape by 20 Contemporary Writers and the translator and editor of Gaito Gazdanov’s An Evening with Claire. Daynard’s work has received notable mentions in Best American Essays as well as Pushcart Prize nominations. She has taught writing at Harvard University, at MIT, and in the MFA program at Emerson College.

Posted by Margaret @ JustOneMoreChapter at 4:30 PM