The Curse of Anne Boleyn by C.C. Humphreys (GIVEAWAY) 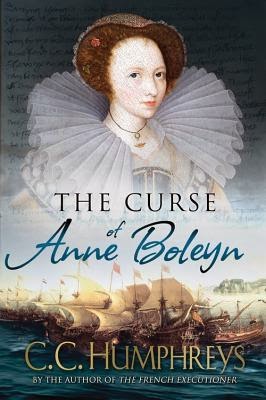 "If you like Bernard Conwell's Grail Quest series, you'll love The French Executioner and The Curse of Anne Boleyn. To my mind Cornwell is good, but Humphreys is better."—Sally Zigmund, Historical Novels Review (UK)

From the masterful C.C. Humphreys, comes the captivating sequel to The French Executioner.

Nearly twenty years have passed since Anne Boleyn died at the hands of her slayer and savior, Jean Rombaud. All he wants is to forget his sword-wielding days and live happily with his family. Yet her distinctive six-fingered hand, stolen at her death—and all the dark power it represents—still compels evil men to seek it out.

When Jean's son, Gianni, joins the Inquisition in Rome and betrays all his father worked for, Jean discovers that time alone cannot take him—or his son—far from his past. But he never expected his whole family, especially his beloved daughter Anne, to become caught up once more in the tragic queen's terrible legacy.

From the savagery of way in Italy to the streets of London and Paris and the wilds of North America, The Curse of Anne Boleyn sweeps readers into a thrilling story that puts love, loyalty, and family to the ultimate test.


"With The French Executioner, Humphreys established himself as a quality purveyor of historical detail and vigorous action...This unusual story line is dispatched with consummate skill."
—Good Books Guide (UK)

Chris (C.C.) Humphreys is an actor, playwright, fight choreographer and novelist.  He has written nine historical fiction novels including The French Executioner, runner up for the CWA Steel Dagger for Thrillers; Vlad – The Last Confession,  the epic novel of the real Dracula; and A Place Called Armageddon. His latest YA novel is The Hunt of the Unicorn. His work has been translated into thirteen languages.

An Excerpt from THE CURSE OF ANNE BOLEYN by C.C. Humphreys


The freezing mist seemed to pool thicker about the chapel doors, yet no one seemed anxious to seek shelter from it. Tucknell fiddled with the keys in his hand, the three laborers leaned on shovels and picks, avoiding each other’s eyes. Even Thomas felt a reluctance to proceed. Outside the iron-studded doors, the frigid air was at least connected to the world of the living, their footprints in the frost a trail back to light and warmth. Ahead, within the darkness, lay a deeper cold – the realm of the dead. And they were there to violate that realm.
After a few moments watching plumes of breath stripe the night, Thomas shifted, made to speak, to command. Before the breath could become a voice in him, the warder pulled him slightly to one side, whispered, “Sir. Let me ask of you once more. Beg of you. Do not do this. It is a sin.”
“I have my orders, Tucknell. And you have yours. You saw the signature on the papers. This command comes from the Queen herself.”
It was not strictly true, but the officer was not to know that. He drew back, seeking Thomas’s eyes.
“I know our gracious sovereign Mary has little reason to love… she who lies here. But to thus despoil her tomb?” His voice softened. “You are an Englishman, sir, and a gentleman I can tell. Let us spare an English lady further humiliation.” Off Thomas’s silent stare he cried, “For Jesu’s sake, man, hasn’t she suffered enough?”
Thomas leaned in, so his voice, softened now, beguiling, would not carry to the waiting, shifting men.
“I do not like this either, man. But we have had reports that this woman may have taken something with her to the grace. Something that may… be of use to Her Majesty.”
Tucknell’s face twisted, as if containing a violent struggle. “She took nothing with her save a prayer book and the clothes she wore. I know, sir, because I was there.” The struggle overpowered him. “I know because I helped to kill her and to bury her afterward. May God have mercy on my soul!”
“Amen.”
Thomas watched a tear that had nothing to do with the harsh wind run from this tough soldier’s eye, and wondered at the power this woman, dead nearly twenty years, still had over the living. A power to be turned into a weapon for the Catholic cause, so his superiors in the Society of Jesus believed. But only if he, Thomas Lawley, did his duty now.
“Come, Master Tucknell. You have merely to show me the way. If there is sin after that, it is I, and I alone, that will commit it.” The soldier before him hardened, the tears withdrawn. Without another word he turned to the door and fitted into its lock the largest of the keys he carried. It grated there, with a cry like that of the raven defending its cache of food. The doors, in contrast, swung open, as silent as on any tomb.

Rafflecopter Giveaway
3 copies of THE CURSE OF ANNE BOLEYN by CC Humphreys
Open until June 1, 2015


a Rafflecopter giveaway
Posted by Margaret @ JustOneMoreChapter at 3:12 PM