After the War is Over by Jennifer Robson 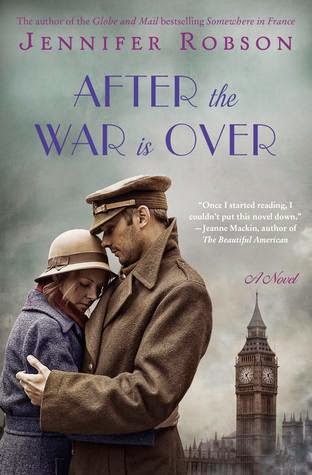 The USA Today and #1 Globe & Mail bestselling author of SOMEWHERE IN FRANCE returns with her sweeping second novel.

For fans of Downton Abbey. England, 1919 In the months following the Armistice, Charlotte Brown leaves behind her wartime work as a nurse and returns to her life as a social worker in Liverpool. There she sets about helping her fellow citizens better themselves, though the world is still reeling from the devastation and loss of the Great War.

In her journey she is guided by friends old and new, among them the other women at her boarding house, her colleagues at work, and a radical young newspaper editor who may have romantic designs on her. But even as she tries to look ahead, one man continues to pull her back into her past: Edward, now the Earl of Cumberland, the brother of Charlotte's dearest friend. She hasn't seen him in years and is shocked to discover him utterly changed. Once charming and infuriatingly arrogant, he is now broken by all he has seen. Still Charlotte sees the specter of the captivating man she knew, and knows he could offer her a world far different from the one she's worked so hard to build for herself.

As the country seethes with unrest, and post-war euphoria flattens into bitter disappointment, Charlotte fears that the only way to keep her independent life of purpose may be to turn her back on the only man she has ever loved.

This is the sequel to Somewhere in France but it is not necessary to have read it before this one.  I opted for the audio version here and the story lent itself very nicely to this format.  Lucy Rayner is the reader and she did a great job - it was a pleasure to listen to.

The war is over but for some life continues where it left off but for the majority, its a struggle both physical and mentally.  Charlotte spent 4 years as a nurse and now dedicates her life to help those in need.  I liked Charlotte she had conviction, she had the drive to help the less fortunate, usually putting others before herself.

Jennifer Robson has a nice writing style, pulling me into this story with details of post war England, which shows her vast knowledge of this time period.  Written with emotion brought out feelings of compassion and empathy.

This isn't a fast paced book but rather a reflection of England, proving that no matter your social class the war affected everyone.