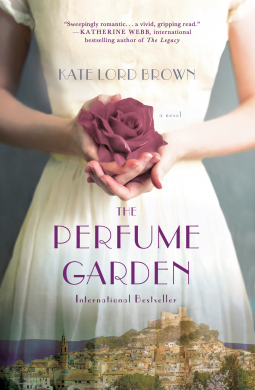 An acclaimed international bestseller, The Perfume Garden is a sensuously written story of lost love, family secrets--and the art of creating a perfect scent.

High in the hills of Valencia, a forgotten house guards its secrets. Untouched since Franco's forces tore through Spain in 1936, the whitewashed walls have crumbled, and the garden, laden with orange blossom, grows wild. Emma Temple is the first to unlock its doors in seventy years. Emma is London's leading perfumier, but her blessed life has taken a difficult turn. Her free-spirited mother, Liberty, who taught her the art of fragrance making, has just passed away. At the same time, she broke up with her long-time lover and business partner, Joe, whose baby she happens to be carrying.

While Joe is in New York trying to sell his majority share in their company, Emma, guided by a series of letters and a key bequeathed to her in Liberty's will, decides to leave her job and travel to Valencia, where she will give birth in the house her mother mysteriously purchased just before her death. The villa is a perfect retreat: redolent with the exotic scents of orange blossom and neroli, dappled with light and with the rich colors of a forgotten time. Emma makes it her mission to restore the place to its former glory. But for her aging grandmother, Freya, a British nurse who stayed in Valencia during Spain's devastating civil war, Emma's new home evokes memories of a terrible secret, a part of her family's past that until now has managed to stay hidden. With two beautifully interwoven narratives and a lush, atmospheric setting, Kate Lord Brown's The Perfume Garden is a dramatic, emotional debut that readers won't soon forget.


Published April 7th 2015 by Thomas Dunne Books
The location of The Perfume Garden is what drew me to it.  Having been to Barcelona and Malaga recently for a visit and seeing the countryside, peaked my interest in its history.  The way this book was written is also a favorite of mine.  Starting in 2001 (Sept. 11th) and then back to 1936 Spain, add a forgotten and neglected house hiding secrets kept hidden for generations.  Well, that is just a recipe for something enticing.

The plot was intriguing, maybe a little predictable at times, but still an interesting story.  Beginning in 2001 with the collapse of the World Trade Centers, Emma's world is turned upside down.  Needing a change she heads to Spain to live in a house recently purchased by her mother. A house with a past, with secrets that could change Emma's life.  I liked Emma, she was genuine, searching for something though not sure what it was she was looking for.  She was strong in the sense of getting away from the familiar and going into the unknown.  But she was also vulnerable and nervous about the future.

The author painted a vivid and emotional time for Spain, a Civil War pre WW II under the Franco regime.  This is a part of history that I am unfamiliar with.  Kate Lord Brown's knowledge of this time period is evident not just with the physical effect but the emotional impact this war had on the country.   Emma's grandmother Freya a nurse during this time and keeper of secrets that she knows will come to light one day.

This is is Kate Lord Brown's debut, I like her writing style, it was engaging, bringing to life a past that is not often written about.  Thank you to netgalley for the opportunity to review The Perfume Garden.

"Sometimes the people you trust most with your heart are the least worthy.  People are fallible, they screw up.  It's up to you whether you can bear that, and forgive, or whether you should walk away.  Sometimes life, and love, is as much about deciding who to let go as who to take with you on this journey."

"Never let your capacity for love be diminished by the actions of others.  Stay true to your heart."

Posted by Margaret @ JustOneMoreChapter at 10:38 PM