The Witches of Moonshyne Manor by Bianca Marais 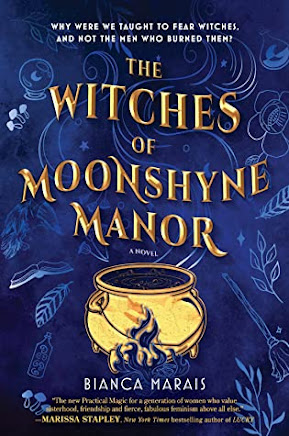 A coven of modern-day witches. A magical heist-gone-wrong. A looming threat.

Five octogenarian witches gather as an angry mob threatens to demolish Moonshyne Manor. All eyes turn to the witch in charge, Queenie, who confesses they’ve fallen far behind on their mortgage payments. Still, there’s hope, since the imminent return of Ruby—one of the sisterhood who’s been gone for thirty-three years—will surely be their salvation.

But the mob is only the start of their troubles. One man is hellbent on avenging his family for the theft of a legacy he claims was rightfully his. In an act of desperation, Queenie makes a bargain with an evil far more powerful than anything they’ve ever faced. Then things take a turn for the worse when Ruby’s homecoming reveals a seemingly insurmountable obstacle instead of the solution to all their problems.

The witches are determined to save their home and themselves, but their aging powers are no match for increasingly malicious threats. Thankfully, they get a bit of help from Persephone, a feisty TikToker eager to smash the patriarchy. As the deadline to save the manor approaches, fractures among the sisterhood are revealed, and long-held secrets are exposed, culminating in a fiery confrontation with their enemies.

Funny, tender and uplifting, the novel explores the formidable power that can be discovered in aging, found family and unlikely friendships. Marais’ clever prose offers as much laughter as insight, delving deeply into feminism, identity and power dynamics while stirring up intrigue and drama through secrets, lies and sex. Heartbreaking and heart-mending, it will make you grateful for the amazing women in your life.

Kindle Edition, 400 pages
Expected publication: August 23rd 2022
by Harlequin Trade Publishing
4/5 stars
I love witchy books and just by the title I knew I wanted to read this one. Bianca Marais is a new to me author and I loved discovering that she is from Toronto, just adding to what a talented bunch of authors we have from here.

The Witches of Moonshine Manor is the story with a deadline, the past finally catching up and a spunky 12 year old who infiltrates the lives of these elderly witches. This was a fun read with an eclectic cast of characters along with Widget the crow. I enjoyed the author's writing style, how she weaved in the past and how this group came to be with their vastly different personalities, talents and secrets.

The Witches is the story of friendship. It is witty, mysterious and had a nice ending. There’s a large cast of characters and I wish I had made a cheat sheet right from the beginning just to keep a record of who’s who’s, their special abilities. That being said it didn’t take too long to keep it all straight and enjoy this ride.

Releasing tomorrow it is available for purchase, my thanks to HarperCollins Canada for a digital ARC in exchange for a honest review.
Posted by Margaret @ JustOneMoreChapter at 6:00 AM