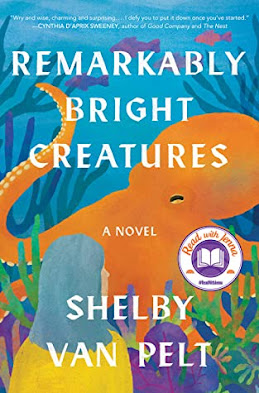 For fans of A Man Called Ove, a charming, witty and compulsively readable exploration of friendship, reckoning, and hope, tracing a widow's unlikely connection with a giant Pacific octopus.

After Tova Sullivan's husband died, she began working the night shift at the Sowell Bay Aquarium, mopping floors and tidying up. Keeping busy has always helped her cope, which she's been doing since her eighteen-year-old son, Erik, mysteriously vanished on a boat in Puget Sound over thirty years ago.

Tova becomes acquainted with curmudgeonly Marcellus, a giant Pacific octopus living at the aquarium. Marcellus knows more than anyone can imagine but wouldn't dream of lifting one of his eight arms for his human captors--until he forms a remarkable friendship with Tova.

Ever the detective, Marcellus deduces what happened the night Tova's son disappeared. And now Marcellus must use every trick his old invertebrate body can muster to unearth the truth for her before it's too late.

Shelby Van Pelt's debut novel is a gentle reminder that sometimes taking a hard look at the past can help uncover a future that once felt impossible.
Audiobook, Unabridged, 11 hours, 16 minutes
Marin Ireland (Narrator)
Michael Urie (Narrator)
Published May 3rd 2022
by HarperAudio
5/5 stars
To be honest this was a book that was not on my radar even when I started seeing the buzz on Instagram. But when a few of my favourite Instagrammers started raving about it I wanted to be one of the cool kids. I went the audio route and thoroughly enjoyed myself. The narrators (noted above) did a great job bringing this book to life.

Told from a number of POVs (including the non human kind) these different characters who at the beginning have no connection. I loved watching the different journeys and to see how all the pieces fit together. Marcellus the giant octopus who lives at the aquarium where Tova works made this story. He was wise, smart and sneaky.

Remarkable Bright Creatures is a debut novel, it is well written, gripping and was hard to put down.  Humorous at times it’s a story of grief, friendship, loneliness and family.

Well I can’t comment on whether I would’ve felt the same if I had read this book, though I imagine I would.  I highly recommend the audiobook to those that feel inclined and are fans of that method of reading.

My copy was obtained through Scribd as part of my monthly subscription
Posted by Margaret @ JustOneMoreChapter at 7:19 PM