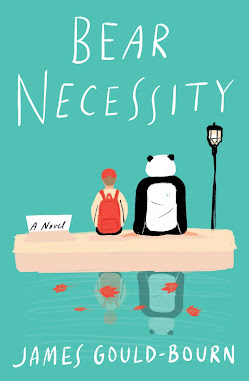 A heartwarming, poignant, and charming debut novel for fans of Nick Hornby and The Rosie Project, about a father and son overcoming their grief in surprisingly inventive ways.

Danny’s life is falling apart. He’s become a single father to eleven-year-old Will—who hasn’t spoken since the death of his mother in a car crash a year earlier—and Danny has just been fired from his construction job. To make matters worse, he’s behind on the rent and his nasty landlord is threatening to break his legs if he doesn’t pay soon. Danny needs money, and fast.

After observing local street performers in a nearby park, Danny spends his last few dollars on a tattered panda costume, impulsively deciding to become a dancing bear. While performing one day, Danny spots his son in the park, and chases off the older boys who are taunting him. Will opens up for the first time since his mother’s death, unaware that the man in the panda costume is his father. Afraid of disclosing his true identity, Danny comforts his son. But will Danny lose Will’s trust once he reveals who he is? And will he be able to dance his way out of debt, or be beaten up before he has a chance?

Filled with a colorful cast of characters, Bear Necessity is a refreshingly unpretentious and ultimately uplifting story of a father and son reconnecting in the most unlikely of circumstances.

Hardcover, 312 pages
Published August 4, 2020
by Scribner
Audiobook, 8 hrs and 6 mins
Narrated by: Rupert Holliday-Evans
By Simon & Schuster Audio
4.5/5 stars
From the cover one would think Bare Necessity is a comedic story involving a panda bear. It is that and so much more. Since the loss of his wife over a year ago Danny has been lost in his grief and struggle to connect with his 11 year old son Will, who hasn’t spoken a word since losing his mother.

I went the audio route with this book and it was fantastic, the accents for the location were spot on and gave the characters life, Rupert Holiday Evans was the narrator and I highly recommend listening to more books by him.

Bare Necessities is the story of the relationship between father and son and of grief - it affects everyone differently and that is shown here.  Desperate times call for desperate measures when Danny finds himself unemployed.  One thing leads to another with Danny ending up in a Panda suit street dancing.  What follows is a heartwarming, at times funny story along the bumpy road of healing and reconciliation.  The unique cast of characters provided the levity needed.
All in all Bear Necessity was a well written story by a new-to-me author. Highly recommend both book and author.
This book was part of my 2022 Reading Off My Shelf Challenge (#49)
Posted by Margaret @ JustOneMoreChapter at 8:41 AM

Email ThisBlogThis!Share to TwitterShare to FacebookShare to Pinterest
Labels: 2022, 2022 Reading off my shelf, James Gould-Bourn