Daughters of the Deer by Danielle Daniel 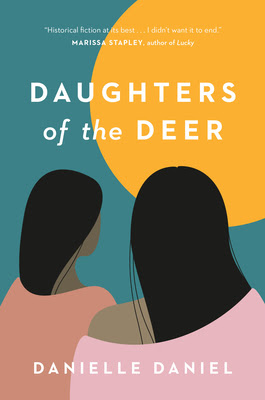 In this haunting, groundbreaking, historical novel, Danielle Daniel imagines the lives of her ancestors in the Algonquin territories of the 1600s, a story inspired by her family link to a girl murdered near Trois-Rivières in the early days of French settlement.
Marie, an Algonquin woman of the Weskarini Deer Clan, lost her first husband and her children to an Iroquois raid. In the aftermath of another lethal attack, her chief begs her to remarry for the sake of the clan. Marie is a healer who honours the ways of her people, and Pierre, the green-eyed ex-soldier from France who wants her for his bride, is not the man she would choose. But her people are dwindling, wracked by white men's diseases and nearly starving every winter as the game retreats away from the white settlements. If her chief believes such a marriage will cement their alliance with the French against the Iroquois and the British, she feels she has no choice. Though she does it reluctantly, and with some fear--Marie is trading the memory of the man she loved for a man she doesn't understand at all, and whose devout Catholicism blinds him to the ways of her people.

This beautiful, powerful novel brings to life women who have literally fallen through the cracks of settler histories. Especially Jeanne, the first child born of the new marriage, neither white nor Weskarini, but caught between worlds. As she reaches adolescence, it becomes clear she is two-spirited. In her mother's culture, she would have been considered blessed, her nature a sign of special wisdom. But to the settlers of New France, and even to her own father, Jeanne is unnatural, sinful--a woman to be shunned, and worse.

And so, with the poignant story of Jeanne, Danielle Daniel imagines her way into the heart and mind of a woman at the origin of the long history of violence against Indigenous women and the deliberate, equally violent, disruption of First Nations culture--opening a door long jammed shut, so all of us can enter.
Paperback, 304 pages
Published March 8, 2022
by Random House Canada
4.5/5 stars
I grabbed this book because of the Canadian historical fiction theme and time period. What I really liked was discovering, after I finished reading, the link between the author and the story.

Beginning in 1657 I was treated to a compelling story with vivid description of life between the French and the Weskarkin Deer clan. Taking place in New France, Trois-Rivières to be exact, as tension mounts between the different groups inhabiting the land.

Daughters of the Deer is a well written story highlighting the early history of Canada, the paths taken by France to populate and the extreme measures they took. I loved the history lesson, the characters were real, hurting with their own desires and needs that were ignored. Frustrating at times to read but also rewarding.

A powerful story that I stumbled across on IG, so glad I did an impulse purchase. I have since learned the author has a MG novel, Forever Birchwood. I’ve purchased it also.

This book was part of my 2022 reading off my shelf challenge.
Posted by Margaret @ JustOneMoreChapter at 8:31 PM