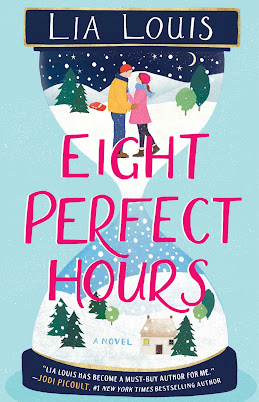 In this romantic and heartwarming novel, two strangers meet in chance circumstances during a blizzard and spend one perfect evening together, thinking they’ll never see each other again. But fate seems to have different plans.

On a snowy evening in March, 30-something Noelle Butterby is on her way back from an event at her old college when disaster strikes. With a blizzard closing off roads, she finds herself stranded, alone in her car, without food, drink, or a working charger for her phone. All seems lost until Sam Attwood, a handsome American stranger also trapped in a nearby car, knocks on her window and offers assistance. What follows is eight perfect hours together, until morning arrives and the roads finally clear.

The two strangers part, positive they’ll never see each other again, but fate, it seems, has a different plan. As the two keep serendipitously bumping into one another, they begin to realize that perhaps there truly is no such thing as coincidence. With plenty of charming twists and turns and Lia Louis’s “bold, standout voice” (Gillian McAllister, author of The Good Sister), Eight Perfect Hours is a gorgeously crafted novel that will make you believe in the power of fate.

Paperback, 336 pages
Published September 28th 2021
by Atria/Emily Bestler Books
3.5 stars
The cover of this book might invoke the feeling of a Christmas story but really it isn’t. The story does start out during a snow storm which is the only reference really to the season. Noelle‘s caught in a blizzard, stranded she meets Sam and together they have eight hours to get to know one another until they separate the next morning.

Part of the story resonated more for me in Noelle‘s role as she takes care of her mother following a stroke. Her life is essentially not her own, she isn't living the life she truly wants. Essentially putting her life on hold for the time being.

I was attracted to this book because the author wrote Dear Emmie Blue back in 2020 which was a five star read for me. Eight Perfect Hours is a charming story of two strangers fated to be together but with many obstacles in the way. It is also a journey of Noelle and her relationship with her mother and brother.  Even though it isn’t wasn’t a five star read for me I did enjoy it.  This was another combo read/audiobook. Emma Powell being the narrator this book comes in at 8 hours and 12 minutes. My first time with this narrator, I will be on the lookout for more since she did a great job.

This book was from my personal library and part of my 2022 reading off my shelf challenge, the audiobook was through Scribd
Posted by Margaret @ JustOneMoreChapter at 6:00 AM