The Long Weekend by Gilly Macmillan 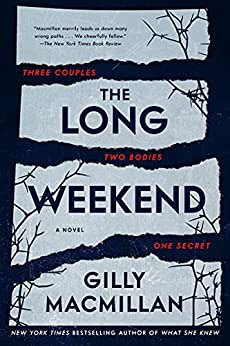 Dark Fell Barn is a “perfectly isolated” retreat, or so says its website when Jayne books a reservation for her friends. A quiet place, far removed from the rest of the world, is exactly what they need.

The women arrive for a girls’ night ahead of their husbands. There’s ex-Army Jayne, hardened and serious, but also damaged. Ruth, the driven doctor and new mother who is battling demons of her own. Young Emily, just wed and insecure, the newest addition of this tight-knit band. Missing this year is Edie, who was the glue holding them together until her husband died suddenly.

But what they hoped would be a relaxing break soon turns to horror. Upon arrival at Dark Fell Barn, the women find a devastating note claiming one of their husbands will be murdered. There are no phones, no cell service to check on their men. Friendships fracture as the situation spins wildly out of control. Betrayal can come in many forms.

This group has kept each other’s secrets for far too long.

Paperback, 336 pages
Published March 29, 2022
by William Morrow
4/5 stars
Sometimes, for no other reason then, a eerie cover will cause this reader to do an impulse purchase and that is what happened here. Though I was a tad nervous that this book would be another one of those stranded in one place with a deranged serial killer on the loose the whole time,  thankfully it wasn’t.
The Long Weekend is a twisty dark story that spans over a couple of days. There is a lot going on with quite a few POVs but after a while it was not hard to keep track of who was who and the different relationships. It did got off to a slow start, but just after the half way mark I could not put this book down. The story was intriguing, the mystery creepy, that location dark and spooky. I read the last third of this book in one sitting, I had to know what was going on. I will confess that I had to suspend my belief a few times as more things continued to happen even right down to the very end. But still an entertaining suspenseful read that was a perfect fit for this long weekend here in Ontario.

Gilly McMillan is not a new author to me, while I enjoyed her book The Nanny I enjoyed this one much more just for the tension, suspense and a fun but dark read.

This book was part of my 2022 reading off my shelf challenge and takes the honour of being book number 50
Posted by Margaret @ JustOneMoreChapter at 8:00 AM