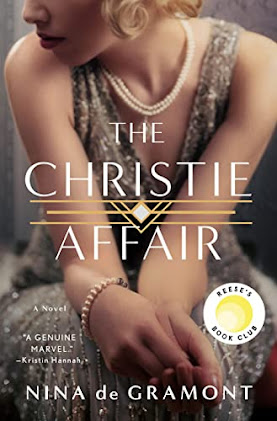 Nina de Gramont's The Christie Affair is a beguiling novel of star-crossed lovers, heartbreak, revenge, and murder—and a brilliant re-imagination of one of the most talked-about unsolved mysteries of the twentieth century.

Every story has its secrets.
Every mystery has its motives.

“A long time ago, in another country, I nearly killed a woman. It’s a particular feeling, the urge to murder. It takes over your body so completely, it’s like a divine force, grabbing hold of your will, your limbs, your psyche. There’s a joy to it. In retrospect, it’s frightening, but I daresay in the moment it feels sweet. The way justice feels sweet.”

The greatest mystery wasn’t Agatha Christie’s disappearance in those eleven infamous days, it’s what she discovered.

London, 1925: In a world of townhomes and tennis matches, socialites and shooting parties, Miss Nan O’Dea became Archie Christie’s mistress, luring him away from his devoted and well-known wife, Agatha Christie.

The question is, why? Why destroy another woman’s marriage, why hatch a plot years in the making, and why murder? How was Nan O’Dea so intricately tied to those eleven mysterious days that Agatha Christie went missing?

Kindle, 320 pages
Audiobook, 10 hours, 23 minutes
Published February 1, 2022
by St. Martin's Press
4/5 stars
Confession time, I have never read an Agatha Christie book. But the buzz on Instagram had me wanting to be one of the cool kids and read it.

There are 2  distinct povs in The Christie Affair. One is that of Christie herself and the other of Nan O’Dea, The woman having the affair with Christie’s husband Archie

This was an audiobook read for me, Lucy Scott was the narrator who did a great job. Alternating between the past brought this story full circle . I wasn’t sure what to expect but I was treated to a multi layered story that was intriguing, mysterious and entertaining. I got to learn more about Christie, her family and the times she lives in. The pressure placed about this writer and the twists and turns kept me listening.

The ending was fitting bringing a nice conclusion to this historical fiction read.

My audiobook was obtained through Scribd.
Posted by Margaret @ JustOneMoreChapter at 8:00 AM