An Echo in the Bone by Diana Gabaldon 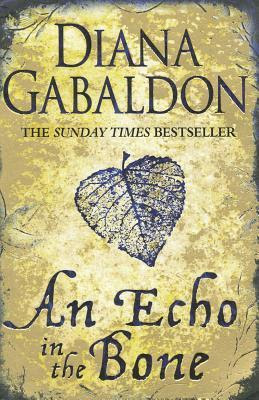 Jamie Fraser, former Jacobite and reluctant rebel, is already certain of three things about the American rebellion: The Americans will win, fighting on the side of victory is no guarantee of survival, and he'd rather die than have to face his illegitimate son--a young lieutenant in the British Army--across the barrel of a gun.

Claire Randall knows that the Americans will win, too, but not what the ultimate price may be. That price won't include Jamie's life or his happiness, though--not if she has anything to say about it.

Meanwhile, in the relative safety of the twentieth century, Jamie and Claire's daughter, Brianna, and her husband, Roger MacKenzie, have resettled in a historic Scottish home where, across a chasm of two centuries, the unfolding drama of Brianna's parents' story comes to life through Claire's letters. The fragile pages reveal Claire's love for battle-scarred Jamie Fraser and their flight from North Carolina to the high seas, where they encounter privateers and ocean battles--as Brianna and Roger search for clues not only to Claire's fate but to their own. Because the future of the MacKenzie family in the Highlands is mysteriously, irrevocably, and intimately entwined with life and death in war-torn colonial America.

With stunning cameos of historical characters from Benedict Arnold to Benjamin Franklin, An Echo in the Bone is a soaring masterpiece of imagination, insight, character, and adventure--a novel that echoes in the mind long after the last page is turned.

Paperback, 1087 pages
Audiobook, 46 hours
Narrated by Davina Porter
Published September 1, 2010
by Orion
3/5 stars
Whew, finally I did it and finished the audio version of the 7th Outlander book. Coming in at 46 hours I did ramp up the speed a little which took it to 34 hours - still a big book. I am determined to get caught up with this series this year.
Davina Porter has narrated this whole series and does a great job.  She brings the story to life, one of my favourite readers.

So, the good. Picking up where the last book left back has Jamie, Clare and Ian leaving Fraser's Ridge behind and heading off to Scotland - with many detours along the way. I liked reading about the year 1777, familiar names and events in history. The lifestyle was depicted nicely. I'm even slowly starting to warm up to Brianne and Roger.  I enjoyed see some faces from the past, though some through sad circumstances.

The not so good. I am not a fan of John Grey, I tried the branch off series that focuses on him and just couldn’t get into it. John and ‘his’ son William took a lot of space that I found distracting but saying that I’m wondering if they play a bigger part in the next book. There were parts of this book where I wondered the point of some scenarios and if they were just fillers.

The ending left some doors open for what comes next. One part of the ending seemed rushed and given what happened should have been more emotional but rather downplayed not giving this reader time to absorb what happened (sorry can’t say more, spoiler.)
All in all, not my favourite book in this series. I'm not sure when I will start Written in my own Heart's Blood it comes in at 57 hours (to scared to see how many pages that is) but hopefully by summertime.

This book was is part of my 2022 Reading Off My Shelf Challenge (#19)
Posted by Margaret @ JustOneMoreChapter at 8:34 AM