Kill All Your Darlings by David Bell 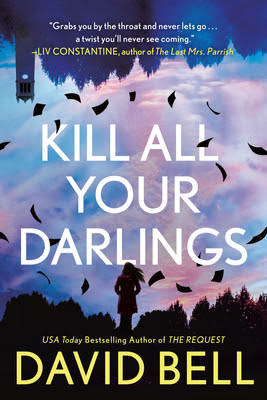 After years of struggling to write following the deaths of his wife and son, English professor Connor Nye publishes his first novel, a thriller about the murder of a young woman.

There's just one problem: Connor didn't write the book. His missing student did. And then she appears on his doorstep, alive and well, threatening to expose him.

Connor's problems escalate when the police insist details in the novel implicate him in an unsolved murder from two years ago. Soon Connor discovers the crime is part of a disturbing scandal on campus and faces an impossible dilemma--admit he didn't write the book and lose his job or keep up the lie and risk everything. When another murder occurs, Connor must clear his name by unraveling the horrifying secrets buried in his student's manuscript.

This is a suspenseful, provocative novel about the sexual harassment that still runs rampant in academia--and the lengths those in power will go to cover it up.

When a student disappears and is presumed dead, her professor passes off her manuscript as his own--only to find out it implicates him in an unsolved murder in this new thriller from the USA Today bestselling author of The Request.

Paperback, 431 pages
Published July 6, 2021
by Berkley Books
3/5 stars
Continuing with a theme I started this month of reading bookish books I was starting to crave something other than a rom/com. Kill All Your Darlings by David Bell sounded like it would fit the bill. This is my first time reading this author.

It definitely sounded enticing, widowed writer with some serious writers block publishes a book written by former student who just happened to disappear 2 years previous. Guess he was still grieving the loss of his family when a young woman is murdered and the scene in the book is kinda the same and he didn't take notice.  Enter the police and a whole cast of characters to unravel this one.

I started out reading and switched over to the audio. Weaving back and forth in time between Connor, Madeline and Rebecca kept me on my toes. At times maybe a little slow but there is a lot going on, so I had to pay close attention to absorb all the clues. The mystery took turns and ultimately finished off nicely. Maybe not so bookish at I would have thought but still a good read with unreliable characters and a look at university life.

This book was part of my 2022 Reading Off My Shelf Challenge
Posted by Margaret @ JustOneMoreChapter at 11:27 PM

Email ThisBlogThis!Share to TwitterShare to FacebookShare to Pinterest
Labels: 2022, 2022 Reading off my shelf, David Bell, New to me author