The Wildling Sisters by Eve Chase 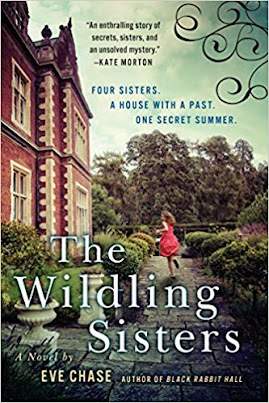 An evocative novel in the vein of Kate Morton and Daphne du Maurier, in which the thrill of first love clashes with the bonds of sisterhood, and all will be tested by the dark secret at the heart of Applecote Manor.


Four sisters.
A house with a past.
One secret summer.
When fifteen-year-old Margot Wilde and her three sisters arrive at Applecote Manor in June 1959, they expect a quiet English country summer. Instead, they find their aunt and uncle still reeling from the disappearance of their daughter, Audrey, five years before. As the arrival of two handsome neighbors divides the sisters' loyalties, Margot is drawn into the life Audrey left behind and the mystery of her vanishing. Fifty years later, Jessie is desperate to move her family out of their London home, and gorgeous Applecote Manor seems like the perfect solution. But once there, Jessie finds herself increasingly isolated, at odds with her fifteen-year-old stepdaughter, and haunted by the strange rumors that surround the manor. Rich with heat and angst, in The Wildling Sisters the thrill of first love clashes with the bonds of sisterhood, taking readers on a breathless journey into the darkest secrets of the human heart.
Paperback, 352 pages
Published July 3, 2018
by G.P. Putnam's Sons
3.5/5 stars
This is my first time reading a Eve Chase book.

Four Sisters
A house with a past.
One shocking summer.

Sounds intriguing right? It was. Told in 2 time periods added to the suspense.

Back in 1959 three sisters arrive to spend the summer at Applecote Manor. Their cousin disappeared 5 years ago with no trace of since. What follows is a time of adjustment for the sisters, with a nervous aunt and uncle trying to safeguard the sisters while also holding out hope for their daughter's her safe return.

In 2009 a young family moves in ready for change and a new beginning. But tragedy is still fresh in the mind of one who doesn’t take well to the new surroundings. Then she becomes obsessed with the disappearance of so long ago.  What pique her interest are things she finds around the house and rumours. Plus she needs something to occupy her mind instead of dealing with the move and a stepmother she isn't fond of.

I enjoyed this book, aside from the mystery there is family dynamics, relationships and trust issues. There is some uncomfortable moments of hope and confusion. Secrets are finally exposed as well as grief revealed and bonding.
I'm glad I read this and look forward to Black Rabbit Hall, which I believe is the author's debut.
This book was part of my 2022 Reading Off My Shelf Challenge (#13)

Posted by Margaret @ JustOneMoreChapter at 10:14 PM

Email ThisBlogThis!Share to TwitterShare to FacebookShare to Pinterest
Labels: 1950's, 2022, 2022 Reading off my shelf, Eve Chase, HF England, New to me author