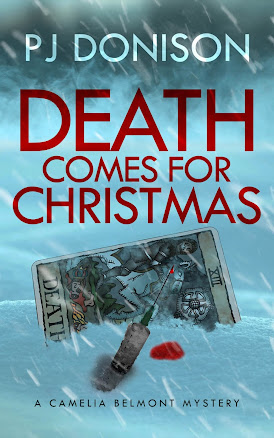 A beloved aunt dies mysteriously. Fentanyl shows up in all the wrong places. Can a burned out lawyer with a drinking problem figure out who killed Auntie Freda?

Camelia Belmont is struggling to manage a stressful job, an escalating anxiety disorder, and a few too many cocktails. She just needs a nice, quiet family holiday back in Saskatchewan, away from her demanding law practice and a very unhappy boss to get her head straight. But when her beloved Auntie Freda dies suddenly, the Phoenix attorney is determined to find the killer. As she digs into the circumstances leading up to her aunt’s death, Camelia discovers a link to a local drug dealer and an exploding opioid crisis.
Despite scanty evidence, a keen RCMP retiree, and uncooperative relatives, Camelia is convinced the killer is one of their own. Tracking down clues despite their protests, Camelia worries her tactics could seriously alienate her closest family members, including her husband. Can she discover what happened before the RCMP take over and the whole mess blows up in her face?
Death Comes for Christmas is Camelia’s Origin Story and the first book in the suspenseful Camelia Belmont Murder Mystery series. If you like soft-boiled whodunnits with a smart female sleuth, true-to-life characters, and dark insights into the opioid epidemic, you’ll love PJ Donison’s debut literary mystery.

A sudden death. A deadly toxic drug. A squabbling family. Can Camelia Belmont find out who really killed Auntie Freda?

Kindle Edition
Published March 2, 2022
4.5/5 stars
I am super excited to share my thoughts about this book. But disclaimer first. I first meet Pamela back in 2017 where we became part of Table 17 at SIWC. I jumped at the chance to read this book and share my thoughts, which in no way is influenced by our relationship.
Death Comes for Christmas has a wonderful mix of characters, some I loved right off the bat (Freda), others I didn’t and there were even a couple that creeped me right out.

There are many layers to this story, which also marks the beginning of a new series. Picture the dysfunctional family setting where alcohol plays a big part for some, there are secrets and a mysterious death.  As you can read from the blurb above there is a lot going on.
I enjoyed the writing, getting to know the characters came naturally, it was atmospheric with the chilly Canadian winter storms and chilly vibes from this lot of players.

There were little droppings of clues along the way that left me scratching my head. But alas all things were wrapped up nicely with an ending I didn’t see coming at all.
Death Comes for Christmas is available for purchase in both print and digital (it's only $1.26!!).  I recommend this for those that love a good whodunit with some savoury characters.
Posted by Margaret @ JustOneMoreChapter at 3:38 PM