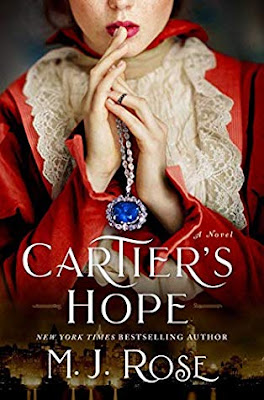 New York, 1910: A city of extravagant balls in Fifth Avenue mansions and poor immigrants crammed into crumbling Lower East Side tenements. A city where the suffrage movement is growing stronger every day, but most women reporters are still delegated to the fashion and lifestyle pages. But Vera Garland is set on making her mark in a man’s world of serious journalism.

Shortly after the world-famous Hope Diamond is acquired for a record sum, Vera begins investigating rumors about schemes by its new owner, jeweler Pierre Cartier, to manipulate its value. Vera is determined to find the truth behind the notorious diamond and its legendary curses—even better when the expose puts her in the same orbit as a magazine publisher whose blackmailing schemes led to the death of her beloved father.

Set against the backdrop of New York’s glitter and grit, of ruthless men and the atrocities they commit in the pursuit of power, this enthralling historical novel explores our very human needs for love, retribution—and to pursue one’s destiny, regardless of the cost.

It’s 1910 in NYC and the Gilded Age is in full swing as the Hope Diamond arrives amid its reputation of bad luck and superstition. MJ Rose placed me right in the midst of the times with her vivid pose that I have come to love. As an undercover reporter, Vera Garland highlighted some of the women’s issues of the time, poverty and march for equal rights, to name a few.

What I struggled with was the development of the plot, while Vera's goal/mission took root early on at about  the 70% mark I was still left wondering when anything would transpire in that department, the story seemed to meander. It was like the author forgot about the direction and left this reader wanting. I wasn't a big fan of the ending for reasons I can't really explain without spoiling the ride for someone else.

For the beautiful writing it’s 4 stars but the story was just 3 stars, averaged out to 3.5.


My thanks to Atria Books for an advanced copy (via Netgalley) in exchange for honest review.
Posted by Margaret @ JustOneMoreChapter at 8:14 PM