Review: The Hidden Light of Northern Fires by Daren Wang 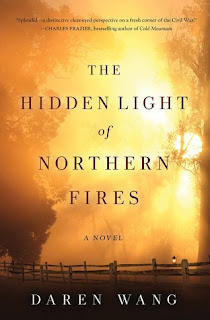 A novel rooted in the remarkable, but little-known, true history of the only secessionist town north of the Mason Dixon Line.

When escaped slave, Joe Bell, collapses in her father’s barn, Mary Willis must ward off Confederate guerillas and spies, Joe’s vengeful owner, and even her own brother to help the handsome fugitive cross to freedom.

Mary has always been an outcast, an outspoken abolitionist woman in a town of bounty hunters and anti-Union farmers. Helping runaways is the only thing that makes her life in Town Line bearable. As the countryside is riled by the drumbeat of civil war and the promise of an extravagant bounty for the wounded fugitive, Mary finds herself drawn to the stranger in forbidden ways. When rebels cross from nearby Canada intent on killing him, they bring the devastation of the brutal war to the town and the farm and threaten to destroy all that Mary loves.

Released in 2017 this is Daren Wang's debut bringing to light another glimpse into the Underground Railway.

The Hidden Light of Northern Fires is told from multiple pov's, which when done right can be wonderful.  But for some, it can be distracting and confusing at times.  This book fits right in the middle, there were times I had to stop and think who was who, where they were and which side they were on.  The characters themselves I found interesting, getting the different perspectives, the reasoning and such opened my eyes a little wider to this time in history.

I think it was the location that really drew me in, especially the latter half of the book where some of the action happened literally in my backyard - who doesn't love to read local history?

All in all a solid debut with a gorgeous cover.


My thanks to St. Martin's Press for a digital copy in exchange for an honest review.

Posted by Margaret @ JustOneMoreChapter at 11:28 AM