Review: Whisper Me This by Kerry Anne King 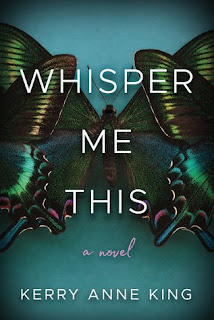 Single mother Maisey Addington has always fallen short of her own mother’s expectations—never married, a bit adrift, wasting her high IQ on dead-end jobs. The only thing Maisey’s sure she’s gotten right is her relationship with her twelve-year-old daughter, Elle…until a phone call blows apart the precarious balance of their lives. Maisey’s mother is in a coma, and her aging father faces charges of abuse and neglect.

Back at her childhood home, Maisey must make a heartrending life-or-death decision. Her confused father has destroyed family records, including her mother’s final wishes. Searching for answers, Maisey uncovers one unspeakable secret after another when she stumbles upon a shattering truth: a twin sister named Marley.

Maisey’s obsession with solving the mystery of her sister forces her to examine her darkest memories and triggers a custody battle with Elle’s father. Will Maisey’s love for her daughter be strong enough to break a cycle of abuse and create a new beginning for them all?

I won this book from the lovely and talented Barbara Claypole White and am kicking myself for waiting so long to read it.  Kerry Anne King is a new to me author, I am now searching for her previous books so I can enjoy more of her writing.

Whisper Me This is a book I dived into without reading the blurb and I instantly connected not just with Maisey and her daughter Elle but the author's writing.  It was authentic and maybe because I at one time was a caregiver it hit closer for me.  There are many triggers in this book, abuse (both verbal and physical) along with guilt and anger.


“And still, through all this overwhelming grief and fear and loss, my anger is an ever-present demon. It tangles itself in all the other emotions, stealing the sweetness from my love, poisoning my fear. I watch from the doorway, until finally everything stops.”

Told from the POV of Maisey, letters her mother wrote and also Tony, the fireman and former schoolmate of Maisey. Whisper Me This is a journey for both Maisey and Tony, it's about overcoming demons, letting go and letting others in. There is mystery here and while at times it might have been predictable to a certain degree, I was still anxious for the details to be revealed and things to click into place.

Kerry Anne King is an author I will recommend to those that love beautiful covers, family drama and getting sucked into a good book.

This book is from my personal library and part of my 2020 reading my shelf challenge.

Posted by Margaret @ JustOneMoreChapter at 8:06 PM