Review: The Whispers of War by Julia Kelly 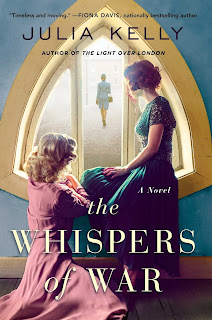 The start of World War II looms over three friends who struggle to remain loyal as one of them is threatened with internment by the British government, from the author of the “sweeping, stirring” (Kristin Harmel, internationally bestselling author of The Room on Rue Amélie ) The Light Over London.

In August of 1939, as Britain watches the headlines in fear of another devastating war with Germany, three childhood friends must choose between friendship or country. Erstwhile socialite Nora is determined to find her place in the Home Office’s Air Raid Precautions Department, matchmaker Hazel tries to mask two closely guarded secrets with irrepressible optimism, and German expat Marie worries that she and her family might face imprisonment in an internment camp if war is declared. When Germany invades Poland and tensions on the home front rise, Marie is labeled an enemy alien, and the three friends find themselves fighting together to keep her free at any cost.

Featuring Julia Kelly’s signature “intricate, tender, and convincing” (Publishers Weekly) prose, The Whispers of War is a moving and unforgettable tale of the power of friendship and womanhood in the midst of conflict.

The Light over London was Julia Kelly's debut, it's a book I enjoyed with a story that enlightened me with some of the different roles women held during WW2.  With The Whispers of War the author took me again back to WW2 and again I was educated and entertained at the same time.

While this was a dual time period story the majority takes place in the past.  It's the story of 3 friends, their friendship and how it developed.  With each of them given time to tell their story allowing this reader to get a real sense of who they are, the struggles they faced and what drove them forward.

Between an interesting plot about Germans living in England as war breaks out Whispers of War is a well written story with developed characters that focus on friendship, the bonds that connected these women and the sacrifices they make for each other.


My thanks to Simon & Schuster Canada for an ARC in exchange for honest review.
Posted by Margaret @ JustOneMoreChapter at 9:49 PM