Review: The Girl From Krakow by Alex Rosenberg 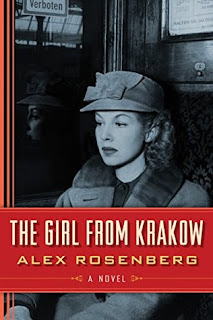 It’s 1935. Rita Feuerstahl comes to the university in Krakow intent on enjoying her freedom. But life has other things in store—marriage, a love affair, a child, all in the shadows of the oncoming war. When the war arrives, Rita is armed with a secret so enormous that it could cost the Allies everything, even as it gives her the will to live. She must find a way both to keep her secret and to survive amid the chaos of Europe at war. Living by her wits among the Germans as their conquests turn to defeat, she seeks a way to prevent the inevitable doom of Nazism from making her one of its last victims. Can her passion and resolve outlast the most powerful evil that Europe has ever seen?

In an epic saga that spans from Paris in the ’30s and Spain’s Civil War to Moscow, Warsaw, and the heart of Nazi Germany, The Girl from Krakow follows one woman’s battle for survival as entire nations are torn apart, never to be the same.


The synopsis above does a good job of telling what this book is about. Coming in at 442 pages this is a nice sized book that one can sink their teeth into.  There is time to get to know the characters and whats makes them tick, time to create a plot with depth and substance.

This is Rita's journey before, during and after the war.  The author shows a real and vivid picture of what took place and it wasn't hard to visualize and feel for those affected by this war.

What I struggled with here was the lack of emotion in not just Rita but those she interacted with.  Here is where I could say more but don't want to give away what takes place.  Remember this is just my opinion, others may fell differently, but I would have liked more depth to her character.  I didn't feel that bond between her and her husband/child/lover and Dani.  There were no words or displays of emotion so show how much she missed her son and even the ending didn't cut it for me.  Remember my opinion only.

I think there is a great story in the making here, I didn't hate it but not a favorite.

Posted by Margaret @ JustOneMoreChapter at 10:45 AM