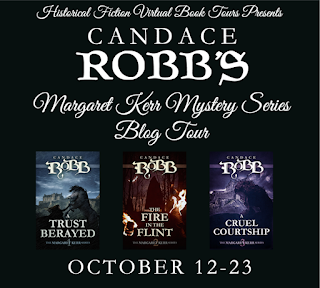 Please join Margaret Kerr as she tours the blogosphere for her Margaret Kerr Mystery Series, from October 12-23, with HF Virtual Book Tours, and enter to win one of three (3) Sets of A TRUST BETRAYED and THE FIRE IN THE FLINT in eBook!

A Trust Betrayed (Book One) 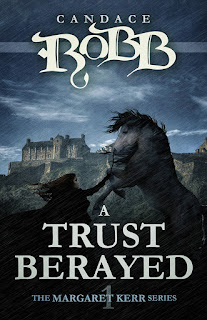 “Thirteenth-century Edinburgh comes off the page cold and convincing, from the smoke and noise of the tavern kitchen to Holyrood Abbey under a treacherous abbot. Most enjoyable.” —THE LIST
In the spring of 1297 the English army controls lowland Scotland and Margaret Kerr’s husband Roger Sinclair is missing. He’d headed to Dundee in autumn, writing to Margaret with a promise to be home for Christmas, but it’s past Easter. Is he caught up in the swelling rebellion against the English? Is he even alive? When his cousin, Jack, is murdered on the streets of Edinburgh, Roger’s last known location, Margaret coerces her brother Andrew, a priest, to escort her to the city.
She finds Edinburgh scarred by war—houses burnt, walls stained with blood, shops shuttered—and the townsfolk simmering with resentment, harboring secrets. Even her uncle, innkeeper Murdoch Kerr, meets her questions with silence. Are his secrets the keys to Roger’s disappearance? What terrible sin torments her brother? Is it her husband she glimpses in the rain, scarred, haunted? Desperate, Margaret makes alliances that risk both her own life and that of her brother in her search for answers. She learns that war twists love and loyalties, and that, until tested, we cannot know our own hearts, much less those of our loved ones.


The Fire in the Flint (Book Two) 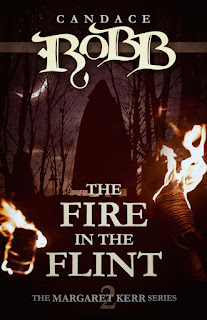 “Intrigue abounds…. Robb’s captivating blend of history and mystery vividly evokes medieval Scotland.” —BOOKLIST
Scots are gathering in Murdoch Kerr’s Edinburgh tavern, plotting to drive out the English forces. Margaret takes her place there as innkeeper, collecting information to pass on to William Wallace—until murder gives the English an excuse to shutter the tavern. The dead man was a witness to the intruders who raided chests belonging to Margaret’s husband and her father, the latest in a string of violent raids on Margaret’s family, but no one knows the identity of the raiders or what they’re searching for.
Margaret’s uncle urges her to escape Edinburgh, but as she flees north with her husband Roger, Margaret grows suspicious about his sudden wish to speak with her mother, Christiana, who is a soothsayer. Margaret once innocently shared with Roger one of Christiana’s visions, of “the true king of Scotland” riding into Edinburgh. Now she begins to wonder if their trip is part of a mission engineered by the English crown… 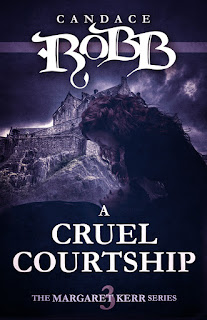 “This is history as it should be told!” —GOOD BOOK GUIDE
In late summer 1297, Margaret Kerr heads to the town of Stirling at the request of William Wallace’s man James Comyn. Her mission is to discover the fate of a young spy who had infiltrated the English garrison at Stirling Castle, but on the journey Margaret is haunted by dreams—or are they visions?—of danger.
He who holds Stirling Castle holds Scotland—and a bloody battle for the castle is imminent. But as the Scots prepare to cast off the English yoke, Margaret’s flashes of the future allow her to glimpse what is to come—and show her that she can trust no one, not even her closest friends.
A CRUEL COURTSHIP is a harrowing account of the days before the bloody battle of Stirling Bridge, and the story of a young woman’s awakening. 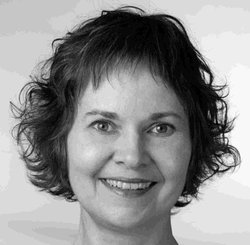 Growing up, Candace Robb wanted to be a ballerina, tap dancer, folk singer, journalist—but on the day that she walked into Liz Armstrong’s undergraduate class on Chaucer’s Troilus and Criseyde, that all changed. A gifted teacher, lively, witty, always laughing even when cringing at a lazy response, Dr. Armstrong launched into the opening stanzas, and within a few lines Candace’s ears adjusted to the middle English—and she was hooked. Chaucer’s psychological study of the two lovers was a revelation to her. The next quarter was The Canterbury Tales. That clinched it. Candace went on to graduate work in medieval history and literature, and ever since she’s been engaged in bringing to life the rich culture of the period, from the arts to the politics. She is the internationally acclaimed author of thirteen crime novels featuring the sexy, brooding, clever Owen Archer, who solves crimes for John Thoresby, Archbishop of York and Lord Chancellor of England, and the young Margaret Kerr, searching for her missing husband and her role in a Scotland overrun by English soldiers. Candace is currently under contract with Pegasus Books for a new crime series set in 15th century York, the Kate Clifford mysteries, which will debut in 2016.

Writing as Emma Campion, Candace has published two historical novels about the women of the English court in the 14th century, A Triple Knot and The King’s Mistress.

Born in the Blue Ridge Mountains of North Carolina, Candace grew up in Cincinnati, Ohio, and has lived most of her adult life in Seattle, Washington, which she loves for its combination of culture, natural beauty, and brooding weather so like Yorkshire, Wales, and Scotland, which she visits as often as possible. She has taught the art of writing the crime novel in the University of Washington’s certificate program, and offers workshops in writing the historical novel and in creating and plotting the crime series. Candace (and Emma) blog about writing and medieval topics at A Writer’s Retreat, ecampion.wordpress.com.

To win one of three (3) Sets of A TRUST BETRAYED and THE FIRE IN THE FLINT in eBook, enter using the Rafflecopter Widget below.
Rules
– Giveaway ends at 11:59pm EST on October 23rd. You must be 18 or older to enter.
– Giveaway is open internationally.
– Only one entry per household.
– All giveaway entrants agree to be honest and not cheat the systems; any suspect of fraud is decided upon by blog/site owner and the sponsor, and entrants may be disqualified at our discretion
– Winner has 48 hours to claim prize or new winner is chosen.