The Writing Retreat by Julia Bartz 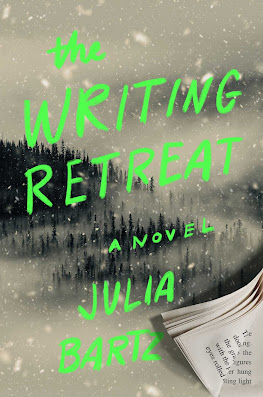 writer’s retreat that descends into a nightmare.

Alex has all but given up on her dreams of becoming a published author when she receives a once-in-a-lifetime opportunity: attend an exclusive, month-long writing retreat at the estate of feminist horror writer Roza Vallo. Even the knowledge that Wren, her former best friend and current rival, is attending doesn’t dampen her excitement.

But when the attendees arrive, Roza drops a bombshell—they must all complete an entire novel from scratch during the next month, and the author of the best one will receive a life-changing seven-figure publishing deal. Determined to win this seemingly impossible contest, Alex buckles down and tries to ignore the strange happenings at the estate, including Roza’s erratic behavior, Wren’s cruel mind games, and the alleged haunting of the mansion itself. But when one of the writers vanishes during a snowstorm, Alex realizes that something very sinister is afoot. With the clock running out, she’s desperate to discover the truth and save herself.

A claustrophobic and propulsive thriller exploring the dark side of friendships and fame, The Writing Retreat is the unputdownable debut novel from a compelling new talent.

Kindle Edition, 320 pages
Expected publication February 21, 2023
by Atria/Emily Bestler Books
2.5/5 stars
Alex has been struggling with writer's block for the past year, ever since a dramatic split with her best friend, and now, the two of them will be spending a whole month together at a writing retreat in the middle of nowhere. Told from Alex's point of view, the story starts off strong, giving readers a feel for the characters' personalities, insecurities, and what drove them apart. Along with three other women, they embark on a regimented writing retreat with strict deadlines, complex characters, and a host who is not only eccentric but also quite peculiar.
At first, the story grabbed me, but then at the halfway point, it seemed to take an unexpected and somewhat odd direction. Despite the many five-star reviews this book has received, I found the storyline to be convoluted, over-the-top, and with portions that were not necessary at all. As I read on, my interest waned, and sadly, the ending did not work for me.
My thanks to Atria Books and NetGalley for providing me with a digital copy of this book in exchange for an honest review.
Posted by Margaret @ JustOneMoreChapter at 9:14 PM

Email ThisBlogThis!Share to TwitterShare to FacebookShare to Pinterest
Labels: 2023, Julia Bartz, Netgalley, New to me author